Republic of Ireland goalkeeper Shay Given watched from the bench as Stoke City squandered a two-goal lead against Swansea at the Britannia Stadium.

Given’s hopes of making Martin O’Neill’s 23-man European Championship squad had been boosted after it was confirmed that Stoke No 1 Jack Butland fractured his ankle in England's 3-2 win over Germany and is out for the season - and the Euros.

It potentially opened the door to first-team action at the Britannia for the Donegal man, but Mark Hughes opted to put Dane Jakob Haugaard between the sticks on Saturday, handing the 23-year-old his Premier League debut.

The Europe-chasing Potters looked destined for a fifth win in seven games after Ibrahim Afellay, on his 30th birthday, and Bojan Krkic had put them 2-0 up with goals in the 13th and 53rd minutes respectively.

But Haugaard was then beaten twice, by Gylfi Sigurdsson's strike in the 68th minute and then substitute Alberto Paloschi's deflected shot 11 minutes later.

The result sees 15th-placed Swansea remain 10 points clear of the relegation zone, while Stoke stay eighth after what they will certainly regard as two points dropped.

It was the visitors who fashioned the contest's first attempt on goal, with Bafetimbi Gomis' strike deflecting narrowly wide in the eighth minute.

There was then a nervy moment seconds later from Haugaard as he met the resulting corner with an unconvincing punch. 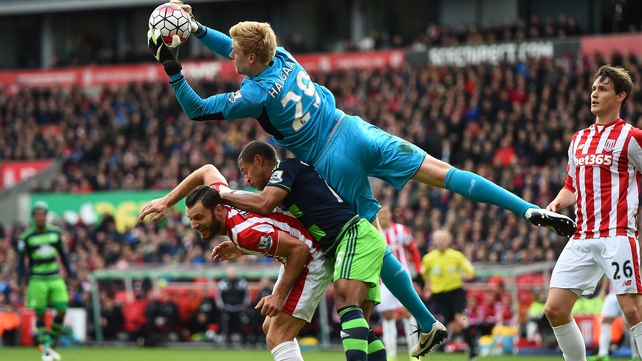 But having emerged from those opening exchanges unscathed, Stoke soon took control.

They grabbed the lead when neither Federico Fernandez nor Angel Rangel did enough to stop Marko Arnautovic on the left, and he delivered a fine cross that Afellay, more or less unmarked, had little trouble converting with his head from close range.

Swansea struggled to make much of a response and their frustration appeared evident when Ashley Williams made a rash sliding challenge on Joselu. Stoke fans called for a red card but referee Martin Atkinson showed the Swans captain a yellow.

Joselu then leapt well to connect with Glenn Whelan's free-kick, only to send it straight into the arms of Lukasz Fabianski.

And Bojan, who was growing into the game, went on a great run past several Swansea men before laying the ball to Afellay, who blasted off-target. 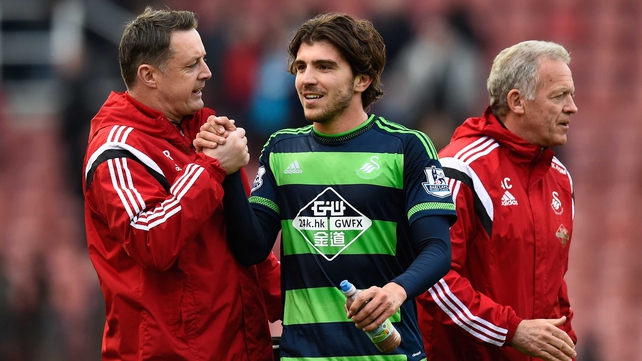 At the other end, a solid defensive effort from the hosts restricted Swansea to harmless efforts from Leroy Fer and Gomis, plus a low Jack Cork shot that Haugaard saved comfortably.

There was little indication that the pattern of the game would change when Bojan then doubled Stoke's lead shortly after the interval, the Spaniard collecting the ball from Whelan in the middle of the Swansea half, being allowed by the away defence to advance to the edge of the box and hitting a shot that Fabianski got a hand to and perhaps should have saved.

However, the Welsh side pulled a goal back when Sigurdsson received Wayne Routledge's cross, turned on the edge of the box and unleashed an effort that bamboozled Haugaard.

The introduction of Jefferson Montero, on just before Sigurdsson's goal, had helped invigorate the visitors and after he delivered a dangerous cross that was not finished off, another Swansea substitute then made a telling impact as Paloschi got away from Geoff Cameron and sent a deflected effort past Haugaard.

Stoke desperately sought to regain the lead in the last few minutes but it was to no avail, as Arnautovic put a free-kick into the side-netting and Afellay struck over. 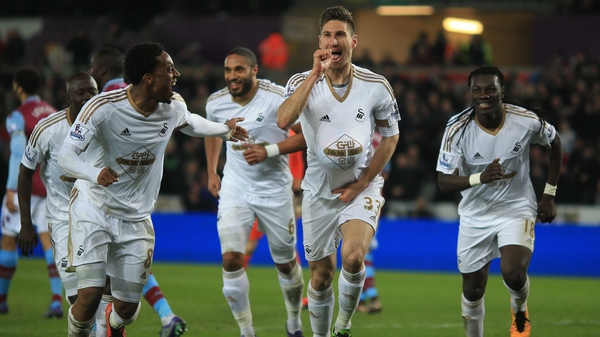