Fernandez had not scored in 57 appearances since signing from Napoli in August 2014 but he chose the perfect moment to open his account, even if the Argentina central defender actually knew little about it.

Villa might have lost a man when Aly Cissokho received a stern lecture from referee Mike Dean rather than a second yellow card after the left-back brought down Modou Barrow after 53 minutes.

But Villa were punished anyway when Brad Guzan failed to collect Gylfi Sigurdsson's free-kick and the ball rolled into an empty net off Fernandez's right shoulder.

Villa might consider the goal an unsatisfactory way to lose a contest but, in truth, it was in keeping with a scrappy game which was woefully short on quality.

For most parts, it looked like a fixture that would not be out of place in the Sky Bet Championship next season which, of course, it could be.

Villa are almost certainly doomed after winning only three league games all season, while Swansea could not take their eight-point buffer above the drop zone at kick-off for granted.

Swansea's run-in is certainly a tough one on paper and points will not come easy on this evidence, but they have now moved within four of the magic 40-point mark and the final few weeks of the season should be less tense.

Villa had lost their five previous games but they began with an enthusiasm which betrayed that sorry statistic.

Joleon Lescott and Jordan Ayew both failed to hit the target from promising positions before Swansea hinted at leaving first gear when Jack Cork directed Sigurdsson's corner wide at the near post.

But there was no rhythm to Swansea's play and Villa enjoyed a share of possession, territory and scoring opportunities which they rarely have in this most desperate of seasons.

Ciaran Clark headed over Jordan Veretout's corner and the Frenchman was again prominent to deliver a cross which Rudy Gestede met for Lukasz Fabianski to clutch on his goal-line.

Bafetimbi Gomis, recalled to the Swansea starting line-up, produced a neat turn but his shot was wayward and Guzan went untested in the Villa goal.

And still Villa pressed as Gestede tried his luck with an overhead kick which Ashley Williams headed over as Fabianski prepared to save.

Swansea head coach Francesco Guidolin was back in the dugout after a three-match absence with a chest infection and he responded to an awful first-half performance by sending on Leon Britton to provide some control in midfield.

He was rewarded within eight minutes of the restart and, although the goal was fortunate, it briefly provided Swansea with some self-belief with Sigurdsson seeking to create and Modou Barrow a threat down the right flank.

But Villa heads refused to drop and Lescott met Carles Gil's corner only to direct it down and straight at Fabianski.

Gomis almost added a second in stoppage time but Swansea held on for victory which should protect their top-flight status. 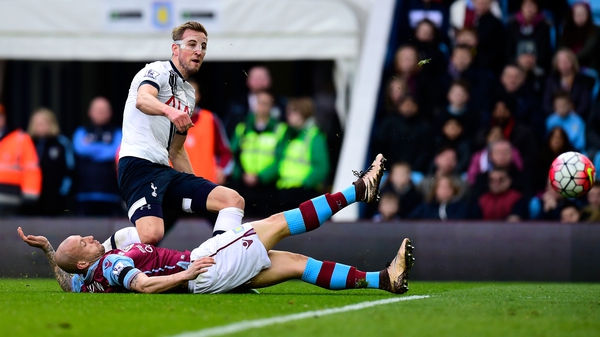