Shay Given’s hopes of making Martin O’Neill’s 23-man European Championship squad were boosted today after it was confirmed that Stoke goalkeeper Jack Butland is likely to miss the rest of the Premier League season with a fracture ankle.

The English FA confirmed the extent of the injury after Butland was carried off on a stretcher during the 3-2 defeat of world champions Germany and is now in danger of missing out on the tournament in France.

Given, 39, hasn't played since being forced with a knee injury during the Republic of Ireland's 1-0 defeat of world champions Germany last October and is competing with Darren Randolph, Rob Elliot and David Forde for a place in the Ireland squad, with Keiren Westwood currently out of favour with O'Neill.

Today's scan revealed I've fractured my ankle, absolutely devasted! I'll be doing everything I can to get back fit as soon as I can! ????????

Butland's misfortune could open the door for the Donegal man to impress before the end of the domestic campaign. The 23-year-old had taken to Twitter to give an update on his situation, before learning he had suffered the fracture.

"But my nature to not give up was my downfall, the injury I'll recover from but more importantly the experience I'll learn from!

"thank you for all your messages, I'll be having a scan today to see the damage to my ankle and will work hard to get back fit! thank you!"

Keep the head up pal @JackButland_One you'll be back in no time ?? #gkunion

Given has yet to make a Premier League appearance for the Potters since signing last summer, though did make two appearances in the Capital One Cup before suffering his injury against Germany.

He will face competition from Jakob Haugaard, a fellow summer signing, who appeared in both of Stoke’s FA Cup games this season.

The former Newcastle and Manchester City goalkeeper was left out of the extended Ireland panel for the friendlies against Switzerland and Slovakia, but O'Neill has previously intimated that there will be a place on the plane for the veteran if he can prove his fitness.

"He hasn't played really since coming off against Germany, and that's a fairly lengthy period of time, but if he's making good progress, then we'll see how it goes,” he said earlier this month.

Randolph appears in pole position to claim the Ireland number one jersey having replaced Given against Germany and subsequently started in the final group game against Poland and the play-off double-header against Bosnia-Herzegovina. 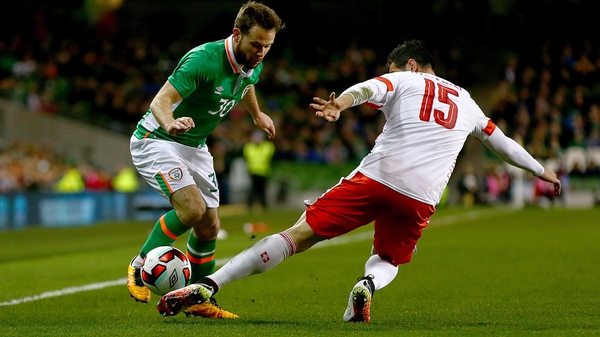