The Central American Football Union (UNCAF), with seven votes in next month's FIFA presidential election, have announced their support for Gianni Infantino.

Infantino is currently general secretary of European football body UEFA and one of the frontrunners in the election to replace disgraced fellow-Swiss Sepp Blatter, which will be held on February 26.

UNCAF is part of the CONCACAF confederation and in a letter provided to Reuters on Monday, the presidents of the seven national federations in the region expressed their support for Infantino.

The statement was signed by the presidents of the federations for Costa Rica, El Salvador, Honduras, Panama, Guatemala, Belize and Nicaragua, along with UNCAF president Rafael Tinocco.

"I'm delighted to have received the endorsement of all the seven federations of UNCAF," Infantino said in a statement.

"This support adds to the ones I've been receiving from all over the world and encourages me to keep working hard, explaining in detail my proposals to as many federations as possible."

Swiss Infantino is currently in Paraguay meeting with officials of the South American confederation CONMEBOL.

Infantino, 45, entered the race to succeed Blatter after UEFA's French head Michel Platini was suspended pending an ethics investigation in October and then banned for eight years from all football activities.

FIFA is going through the worst graft scandal in its history.

Forty-one individuals, many of them national association presidents, and entities have been indicted in the United States for bribery, money laundering and wire fraud since May. 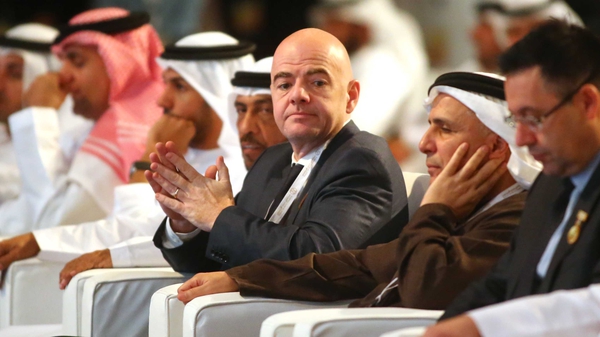