FIFA presidential candidate Gianni Infantino says he believes he can win February's vote to replace Sepp Blatter at the helm of the crisis-hit global football body after picking up what he called major support in the Caribbean.

The FIFA election is taking place against the backdrop of a massive corruption scandal which has seen 41 individuals and entities charged in the United States and Blatter banned from the game for eight years.

Infantino attended a meeting on Sunday of the Caribbean Football Union (CFU), which has 25 votes in the election, and won the backing of Barbados Football Association president Randy Harris.

He said he had "excellent feedback" from CFU members.

The president of the CFU, Gordon Derrick, did not immediately respond to requests for comment on the meeting.

Prince Ali was beaten by 133-73 votes by Blatter in the last FIFA presidential election in May.

Infantino, who is currently general secretary of European football body UEFA, dismissed speculation of a deal with Sheikh Salman that the pair would avoid direct confrontation between the AFC and UEFA in the vote, possibly with the UEFA official taking on the general secretary role.

"I am going for the win"

"I am going for the win. I am the candidate for the presidency and this support gives me even more responsibility and even more will to go until the end to become president of FIFA," he told Reuters by telephone late on Sunday.

"I am candidate for president not for general secretary and I have support from all over the world and many more will come out... With a lot of respect for all the candidates of course, I am there to become FIFA president," he said.

Harris said Infantino's message about development programmes for countries outside the strongholds of football had been well received.

"His platform is about football and improving the game and of course a small country like Barbados we need that kind of vision," he said.

Infantino, who said he had proposed increasing funding for development programmes, said that Harris's backing was a rare case of an FA publicly backing a candidate in a campaign where most are keeping their cards close to their chests.

"This is certainly a major support from outside of Europe"

"This is certainly a major support from outside of Europe. I think it is the first open support to any of the candidates from outside of their 'own continent'," he said.

The corruption crisis within FIFA has broken apart the long-standing political loyalties within the Caribbean which had previously voted as a block for Blatter.

Infantino said his manifesto plans, which will be unveiled this week, had been at the centre of his presentation.

"I spoke about reforms that are needed for FIFA, I spoke about having associations participate much more in FIFA life, for FIFA to become a real democracy," he said. 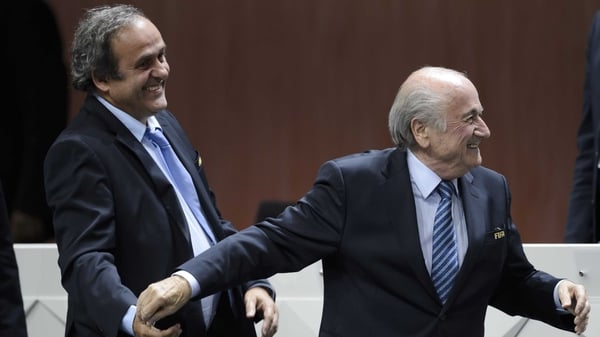