Sunderland’s Duncan Watmore modestly thanked his ‘awesome’ club and tutors after becoming only the second player in the Premier League to graduate with first-class honours.

The 21-year-old juggled intense training sessions required to break into the first team with long hours of study in the evening poring over textbooks and catching up on lectures online.

His proud parents Ian, former chief executive of the Football Association, and Georgina, a rector in Cheshire, proudly watched the graduation ceremony at Newcastle University.

Black Cats boss Sam Allardyce allowed him a day off training to collect his first in economics and business management.

He started his degree at Manchester University when he was playing non-league football with Altrincham.

And when he switched to the north-east after impressing Sunderland scouts he moved to Newcastle University.

In recent weeks he has earned good reviews for his incisive, direct style of play, which has coincided with an upturn in Sunderland's fortunes.

After the the graduation ceremony, he said: "It's a really nice feeling. It has been a lot of hard work in the past three years. It is good to get it done.

"You have to sacrifice a lot with football but that was something I was more than willing to do because football was my ultimate aim and the degree was something I just wanted to do in the evening to catch up at night," he said.

"It was not the typical student life. I missed out on a few things but I really enjoyed it.

"It was hard. There were a lot of long nights in my flat just catching up, reading textbooks, going online for lectures, emailing lecturers.

"It was hard at times but the club at Sunderland were awesome with me, and so were Newcastle University."

Watmore said a typical day involved training and gym work before he would go back to the flat where he lived alone around teatime to start his studies.

"It was not the typical student life. I missed out on a few things but I really enjoyed it.

"There are a lot worse jobs than to combine a degree with than football, so I can't really complain," he said.

The Premier League's only other footballer to gain a first-class degree was former Leeds and Bradford defender David Wetherall, who graduated from Sheffield University in chemistry in 1992. 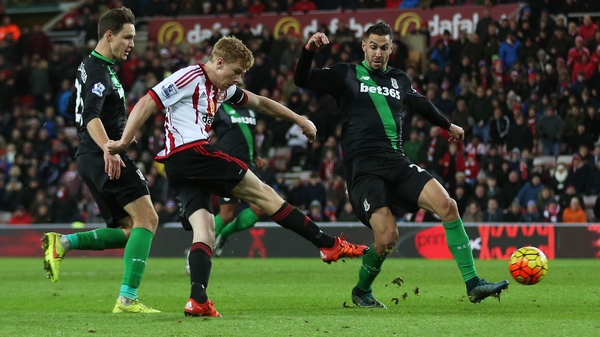