The England Under-21 international rounded off a tense win five minutes from time.

His late strike came just three minutes after full-back Patrick van Aanholt blasted the home side into the lead with a 25-yard pile-driver.

But they kept their fans in suspense before securing their first back-to-back victories of the campaign as City keeper Jack Butland provided stubborn resistance.

The win lifted Sunderland out of the Barclays Premier League's bottom three in front of a delighted crowd of 41,516 at the Stadium of Light, who eventually saw their patience rewarded in fine style.

The first half proved a tight affair as both sides defended deep and in numbers.

Steven Fletcher led the Black Cats' line with some intent and Xherdan Shaqiri, Charlie Adam and Bojan Krkic buzzed about in midfield for the visitors but chances were few and far between.

Fletcher scuffed an eighth-minute shot into the arms of Butland after turning smartly on to Van Aanholt's cross and strike partner Jermain Defoe fired just wide 10 minutes later after neat footwork by Sebastian Larsson to play him into space.

Stoke started to make more of an impression as the half wore on, with Costel Pantilimon having to get down to collect the ball after Larsson's intervention had sent Shaqiri's cross towards the Sunderland goal while Bojan skied a long-range effort high and wide.

However, the game changed 14 minutes before the break when Defoe, who had earlier needed extensive treatment on the pitch, limped off to be replaced by livewire Watmore.

The youngster immediately started to put the Potters' defence under pressure as he ran at defenders at every opportunity.

It took a fine reaction save from Pantilimon 12 minutes before the break to deny Ireland hero Jonathan Walters the opening goal when he met Erik Pieters' cross, but could not beat the Romanian from point-blank range. 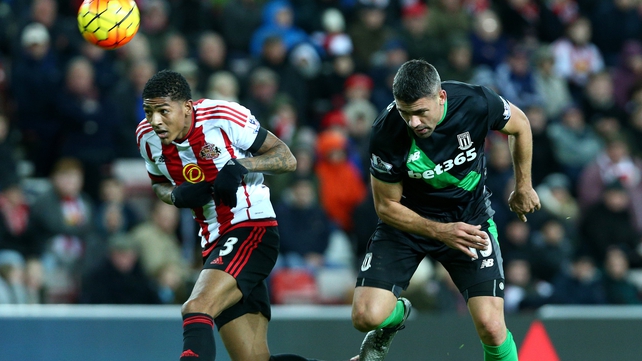 Stoke suffered a major blow just two minutes after the restart when Shawcross, who had been booked before the break for a foul on Fletcher having earlier got away with a talking-to for felling Watmore, was cautioned for a second time.

He was penalised for bringing down the Englishman, although replays suggested he was unfortunate.

Allardyce's response was to send on Jeremain Lens for Larsson, and he very nearly made the difference twice within seconds as he crossed for Yann M'Vila to force Butland into a 55th-minute block with his legs.

Central defender John O'Shea was replaced by winger Adam Johnson and after being fouled by Pieters, the newcomer squared the resulting 82nd-minute free-kick to Van Aanholt who blasted it past the helpless Butland from 25 yards.

And there was better to come for Allardyce when Watmore broke free down the right with five minutes remaining and drilled a low shot past the keeper and inside the far post. 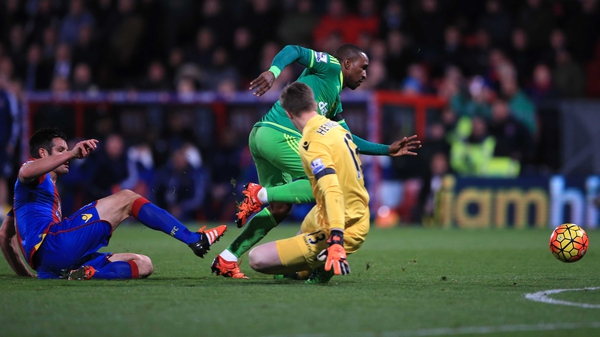