Stoke duo Marko Arnautovic and Xherdan Shaqiri tore Manchester City to shreds in a brilliant first-half display which made Manuel Pellegrini's side look anything but Premier League leaders.

Austria international Arnautovic scored both goals - teed up by the drive and vision of man of the match Shaqiri - and could easily have finished the match with five to himself as the visitors were comprehensively outplayed by the Potters.

City, who finished the match with 10 men after midfielder Fernando limped off following his side's third substitution, began the day top of the table on goal difference but a fourth away game without a win - and the third in a row without a goal - conceded the initiative to the chasing pack.

They were beaten by a Stoke side unrecognisable from last weekend's 2-0 defeat at struggling Sunderland as they oozed confidence - with no greater example set than by centre-back Philipp Wollscheid's Cruyff turn on Kevin de Bruyne on the edge of his own penalty area in the first half.

But it was not a defensive tactic as it allowed the hosts to establish an early dominance with Shaqiri dropping deep and Arnautovic roaming forward from a left-sided position.

The pair linked up for both goals and the same combination could easily have contributed a couple more before the interval.

City's left side was an avenue of weakness Stoke exploited with regularity as Shaqiri showed as early as the seventh minute when he skipped past Fernando, easily beat Aleksandar Kolarov and crossed for Arnautovic to nip in front of Bacary Sagna and side-foot home. 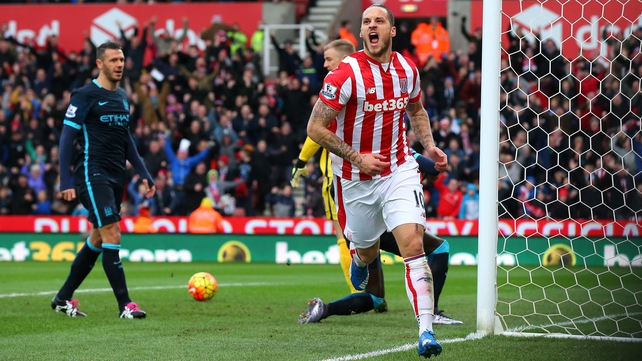 De Bruyne was denied by a good low save from Jack Butland, who also deflected a Kolarov effort onto the post late in the half, just moments before Shaqiri embarrassed the hapless Fernando with a turn of such brilliance the City midfielder was halfway towards his own bench before he realised what had happened.

Fernando may as well have continued his run and taken a seat alongside Pellegrini so poor was his performance - although the same could not be said of Shaqiri who immediately laid on the perfect assist for Arnautovic's second.

City's central defensive pairing of Nicolas Otamendi and Martin Demichelis, in for the suspended Eliaquim Mangala, were at sixes and sevens and that could easily have been the half-time scoreline as Arnautovic headed narrowly wide and hit the post after slipping as he shot from another pass from Shaqiri.

While Mark Hughes may have added considerable style to what used to be a substantial Stoke team they have not lost any of their commitment - evidenced by the diminutive Bojan Krkic racing back to intercept a City counter-attack from Stoke's corner on the edge of his own box.

Stoke's approach did not change with the strong wind at their backs in the second half as Hart saved from Bojan and Arnautovic clipped the rebound into the side-netting, before the Austrian attempted to return the earlier favours from Shaqiri with a pass across goal which required the slightest of touches to score only for the Swiss to get his feet in a tangle and fail to connect.

City's miserable afternoon continued when, 10 minutes after making their third substitution, Fernando went off with a hamstring injury leaving them one short for the final 15 minutes. 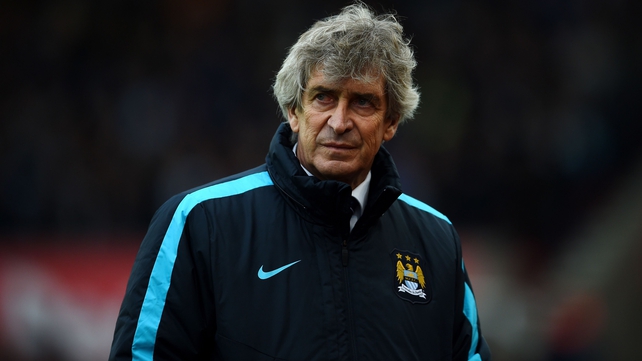 He told BT Sport: "It was a great performance by the guys, in fairness you can talk about formations and what we were looking to do in the game but first and foremost you've got to go out and do actually do it, and that's what they did.

"Each and every one of them put in a high quality performance and a consequence of that was winning a Premier League match against the top of the pile Man City."

Despite the return of creative midfielder David Silva to City's line-up, the home side worked tirelessly to shut down the space and nullify the visitors' threat.

When asked if his side went into the game with the intent to crowd out Silva, Hughes said: "We just wanted that energy. Jeff (Cameron) gives us that, EP (Erik Pieters) gives us that as well. Glenn (Whelan) has that calming influence, he tells everyone where to go and understands that role completely."

The Potters showed plenty of glimpses of the fluent football Hughes has implemented since becoming manager. The former City boss fielded a new-look front free and felt they made the difference.

"We went with something different today, pushing Bojan up front. We haven't played that formation (4-3-3) before but there was a feeling in the back of my mind about today," he added.

"I've been close to doing it but today it worked perfect for us. We were up against a good team but we still needed to retain possession and with the three up top, we certainly had that.

"We had pace and creativity. So I'm pleased with everyone's performance but the front three and the midfield three were exceptional today."

The leaders had an afternoon to forget as City looked shaky at the back but manager Manuel Pellegrini lamented the fact that his side have been struck by injuries.

He said: "The concern is that we are playing in all competitions with just 13 players. The players didn't have the reaction of a fresh squad.

"Today our legs weren't there. We couldn't attack or defend. I am so worried about the two goals we conceded and the lack of chances we created." 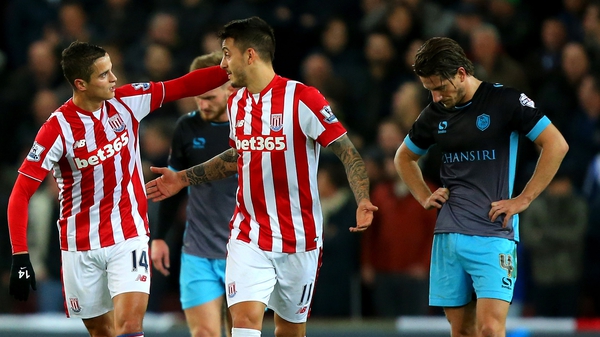