Stoke eased into the Capital One Cup semi-finals as goals from Ibrahim Afellay and substitute Phil Bardsley secured a comfortable 2-0 home victory over Sheffield Wednesday.

Afellay put the Potters ahead in the 30th minute, the summer signing registering his first goal for the club with a delightfully-executed volley.

Bardsley then smashed home a low effort from outside the box in the 75th minute - also opening his Potters goalscoring account - to seal what will be Stoke's first League Cup semi-final appearance since 1971-72, the year they raised the trophy.

Wednesday, the 1990-91 winners, went into this quarter-final having demonstrated their capacity to spring a shock in the previous two rounds with victories over Stoke's fellow Barclays Premier League sides Newcastle and Arsenal.

But the Sky Bet Championship outfit rarely looked like threatening an upset at the Britannia Stadium, with the hosts, who had reached the last eight by beating holders Chelsea on penalties, in control more or less throughout. 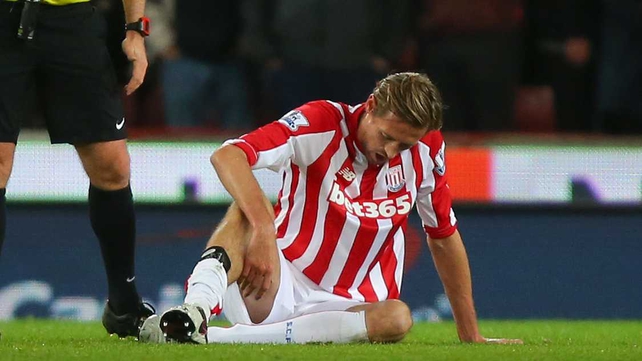 Stoke were disrupted early on as a rare start for Peter Crouch, who had been clutching at his right hamstring for several minutes, came to a premature conclusion with him being forced off, Joselu coming on as the replacement.

Moments later Jonathan Walters had a shot gathered by Joe Wildsmith, before Wednesday responded with a break that ended with Gary Hooper just failing to make contact in front of goal with Kieran Lee's cross.

As Stoke then started to get a grip on the game, Marco van Ginkel drilled a shot from outside the box that Wildsmith turned around the post.

And shortly afterwards the home side had the lead, Joselu collecting the ball from Glen Johnson's throw-in and lofting a cross to Afellay, who volleyed sweetly into the corner.

Wednesday substitute Daniel Pudil - who had come on for the injured Tom Lees - then miscued an attempted backpass and the lively Joselu tried to take advantage, but Wildsmith was off his line quickly to avert the danger.

Stoke continued to be relatively untroubled by their visitors as the second half got under way and they almost extended their lead around the hour mark when Joselu's shot was well saved by the leg of Wildsmith and Afellay's follow-up was blocked by Modou Sougou.

Wednesday had a brief sight of goal as Pudil sent a volley arcing wide, but Stoke then wrapped things up as Van Ginkel touched off a free-kick to Bardsley, who fired a fierce shot in off the post.