Wayne Rooney and Anthony Martial have returned to training ahead of Manchester United's Champions League match against PSV Eindhoven.

Rooney and Martial missed United's 2-1 win at Watford on Saturday due to illness and a foot injury respectively, but both took part in a training session at Carrington on Tuesday morning.

Marouane Fellaini, who has missed the last two games with a calf problem, also took part in the session on a wet morning at the AON Training Complex.

"Fellaini, Martial and Rooney have shown on the training ground their fitness," the Dutchman said on Tuesday.

"I think how we played was the same system as I played with the Dutch national team, and then he (Depay) has more freedom and these players are so happy with that freedom they can excel and he showed that in the first half," Van Gaal said.

The bad news for United is that six first-team players missed training. Phil Jones [ankle] and Ander Herrera [hamstring] were substituted during the win at Vicarage Road and both sat out the session.

Bastian Schweinsteiger played in the victory at Watford but was absent from training due to an unknown problem while long-term absentees Luke Shaw and Antonio Valencia did not feature.

Michael Carrick, who suffered an ankle injury playing for England against Spain recently, was not present either.

Young striker James Wilson was also present after overcoming a knee injury. United top Group B and will qualify for the knockout stages of the Champions League if they beat PSV, who ran out 2-1 winners in the reverse fixture two months ago.

Watch Manchester United v PSV Eindhoven live on RTÉ2 and on the RTÉ Player - ROI only - from 7.30pm on Wednesday night 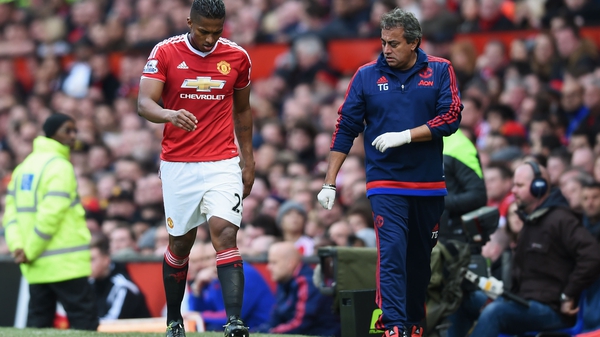 Manchester United's Antonio Valencia out for at least three months