It was a somewhat emotional Stephen Kenny when he spoke in the aftermath of Dundalk's 1-0 win over Cork City in the FAI Cup.

Richie Towell's goal in the extra-time at the Aviva Stadium saw the Lilywhites complete a league and cup double to further underline the Co Louth's club position as the dominant force in the League of Football.

Speaking to RTÉ Sport, Kenny paid tribute to his players and the fans.

"It's brilliant, I'm lost for words," was how he summed up the victory.

"I would have to thank the amazing support we got from Dundalk today. The players all season, well they have been exceptional and they are a credit to themselves. They deserve the FAI Cup."

The Dubliner also paid tribute the the efforts of Cork City but felt the right team had won the trophy.

"Cork are a terrific team - and have players that have won a lot. I thought we deserved the win on the day. We didn't take our chances earlier in the game and it had to go to extra time. Cork defended brilliantly, but at the end of the day, the Horgan (Daryl)-Towell (Richie) combination did the business."

“Both those players are in the prime of their careers and are a great credit to themselves.

As to the future, Kenny wasn't looking too far ahead.

"We'll enjoy tonight first. The fans will also enjoy it. You have there is a great connection between the fans and the players and the energy from the supporters was infectious in the final." 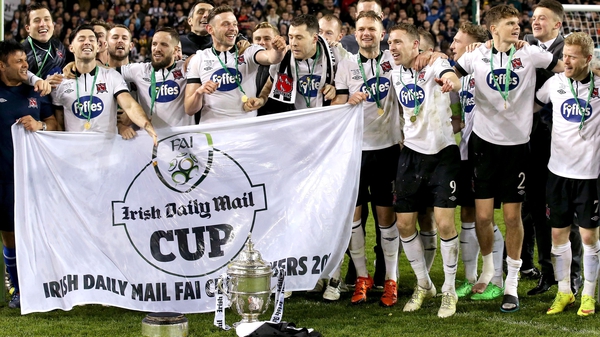 Dundalk do the double with extra-time FAI Cup win