Richie Towell’s extraordinary season ended on a high as the midfielder grabbed an extra-time winner to hand Dundalk victory over Cork City in this afternoon’s FAI Cup final at the Aviva Stadium.

Scoreless after 90 minutes, the game burst into life two minutes into the second period of extra-time as Towell smashed the ball past City keeper Mark McNulty, following some wing wizardry from Daryl Horgan.

Towell’s strike was enough to hand Dundalk a league and cup double, their first since 1988, as the now jaded Cork players could not breach the Dundalk rearguard for the remaining minutes of extra-time, and the travelling Lilywhite fans celebrated the end of another historic season.

In front of a crowd of 25,103 at the Lansdowne Road venue, Cork looked to send an early warning shot to the league champions as Billy Dennehy bombed down the right wing in the opening minute.

His cross into the box found the head of Mark O’Sullivan but the striker’s header was easily gathered as a deflection took the pace out of the ball, and the effort was tame.

That woke Dundalk up though and they dominated play for the opening 15 minutes. Their best effort came from Ronan Finn, who worked the ball well with Towell before unleashing a fine effort that flew inches past the outstretched Mark McNulty, diving to his left.

City did enjoy a good spell when a range of well-worked set-pieces put plenty of pressure on the Dundalk defence as Darren Dennehy came up from the back to cause chaos with his aerial strength.

The set-piece looked like City’s best route to goal and Dundalk keeper Gary Rogers was looking uncomfortable with the sustained pressure.

And the keeper almost handed Cork an opener in the 19th minute after his wayward throw was picked up by Billy Dennehy just outside the box.

A moment’s hesitation allowed Rogers to back-pedal and stop the former Shamrock Rovers man from lobbing the ball into the back of the net, but Dennehy’s clip towards the centre-halves, who were still forward from the corner, was clever.

Andy Boyle, however, was in place to save his keeper’s blushes and headed the danger clear. 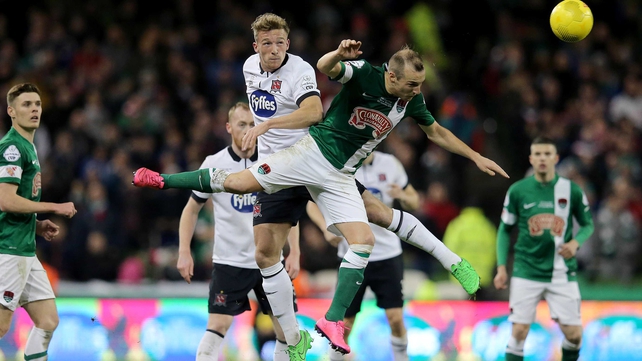 At another set-piece, two minutes later, a whipping corner from Dennehy’s left boot on the right wing, caused Rogers to flap at the ball, but again the Lilywhites’ defence held firm and cleared the danger.

Dundalk worked their own set-piece into an opportunity in the 25th minute but defender Boyle’s header was powered over the bar.

Kevin O’Connor, meanwhile, was doing a fine job man-marking danger-man Towell, who had yet to get going, and the Cork midfielder even had time to break forward into the space outside the box, but his left-footed effort from distance flew wide.

The chances dried up for the remaining ten minutes of the half, with a bad knock to Sean Gannon the only real talking point.

The challenge from Garry Buckley was heavy but went unpunished as the Cork midfielder won the ball before his momentum caused Gannon’s ankle to twist badly, resulting in the end of the right-back’s cup final.

The only positive to be taken out of the substitution from the Lillywhites’ point of view was the arrival of the classy Stephen O’Donnell into the fray as Chris Shields moved to right-back.

Liam Miller did receive a yellow card moments later for a fairly innocuous challenge on Darren Meenan, with the player’s reaction probably making the referee’s mind up.

So scoreless at half-time in an opening half that really failed to ignite, however, two chances within a minute shortly after the break put some real life into the game.

David McMillen was twice handed the chance to open the scoring.

His first effort was a snap-shot, brilliantly stopped from McNulty whose fingertip save prevented the opening goal, before the striker was played through from a sublime Finn pass.

Alan Bennett did enough to put him off as McNulty again came to the rescue, racing out to avert the danger.

One former Ireland international, Colin Healy, replaced another as Liam Miller exited the stage in the 60th minute, however, it was the Dundalk sub O’Donnell who was the real influence as he began to pull the strings with Towell and Finn really coming to life every time the Galway native got on the ball.

Two more chances would test the Cork rearguard with McNulty, yet again, called into action to stop efforts from Horgan and Towell, who finally managed to get away from his man-marker to get his first shot away in the 63rd minute. 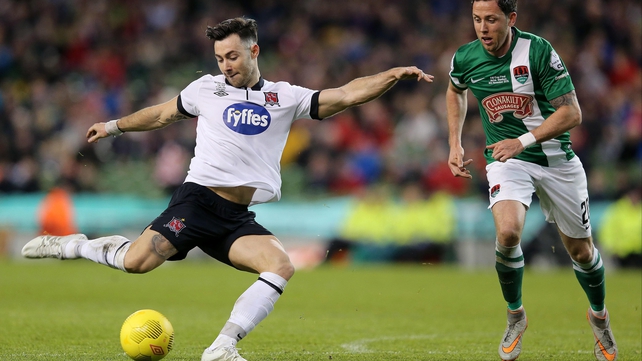 But City were still looking dangerous, exploiting the space left by the advancing Dundalk midfield, with Karl Sheppard joining in with the attack and coming in from the left flank at every opportunity.

Another Cork corner and more anxious goalkeeping handed Bennett a great opportunity to volley the ball on target in the 71st minute. But the ball fell to the wrong man as the centre-half fluffed his lines.

Cork kept the pressure on and a breaking ball found Billy Dennehy arriving into the box but his well-drilled effort was blocked by an outstretched Dundalk leg.

A soft free-kick in the 76th minute led to a penalty appeal, as the well-hit set-piece struck the elbow of Billy Denneny, but it would have been harsh as the Cork player’s arms were close to his body as he jumped.

The danger wasn't cleared, however, and the ball broke for Horgan on the edge of the box but he blasted over.

The match was now edging towards extra time but a well-worked passage of play almost set up a fairytale finish to what might be Towell’s last game for Dundalk.

Horgan found himself in space on the right and cut inside to find substitute Ciaran Kilduff with a deft chip.

The striker’s header was placed almost perfectly into the path of the arriving Towell but the midfielder appeared off balance and his left-footed effort was easily dealt with. Cork cleared, and another 30 minutes would be required to settle this Cup final.

The first half of the extra time was played almost entirely inside the Cork half as Dundalk’s supreme fitness levels really came to the fore.

But, despite their possession, they barely tested the Cork goal - a weak Finn effort and an-off target shot from Horgan were the only chances of note.

But the deadlock was inevitably broken two minutes into the second period as Horgan powered down the left flank before arrowing an inch-perfect cross to the feet of the unmarked Towell.

The Dundalk talisman had time to take a touch and then showed great composure to drill the ball home with his left foot from eight yards out to light up the Havelock Square end, where the remaining pyrotechnics from Hallowe’en were kept in reserve for such an occasion.

Cork had 12 minutes to salvage their season and almost drew level in the 111thminute but Darren Dennehy’s looping header just dropped on the wrong side of the crossbar.

Half-chances at either end came to nothing and as time ticked on towards the 120-minute mark, it was clear that this fairytale ending was going to stick to the script. And deservedly so. 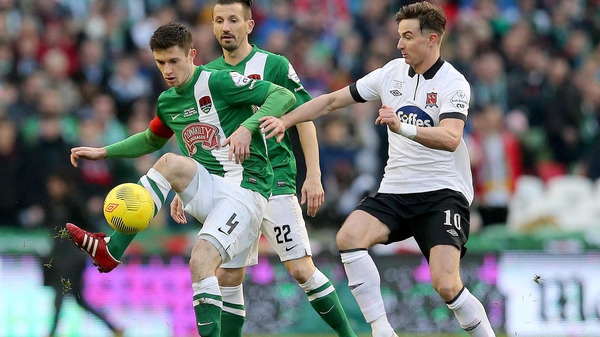