Shamrock Rovers manager Pat Fenlon has defended his team's record so far this season after a sixth draw of the campaign against St Patrick’s Athletic on Monday night at Richmond Park.

The Hoops are unbeaten after 12 league games and have conceded just four goals in those matches.

However, with six draws to their name, they trail league leaders Dundalk by eight points with just over a third of the campaign played.

Asked about the sequence of draws so far in the league, Fenlon said: “We've come to Pat's and got a draw. I think we need to get a bit of credit for that.

"People keep mentioning that to me, but we haven't lost a game yet which is great credit to the players. But we don't seem to get credit for it at all.

“There's nothing we can do about [Dundalk's run]. Dundalk deserve all the credit they get, but we have got to get some as well. We haven't lost a game yet. We have come here to a really good team and I thought we were the better side.

“In the first half we had two or three good chances. But we didn't win. We have to back it up on Friday with three points at home and it becomes a better point away then.

“Everyone else has wrote it off so we'll just get on with it I suppose.”

The stalemate with the Saints saw Fenlon’s men shade a relatively even encounter, with Mikey Drennan missing one of the best chances of the game in the first half.

Fenlon said the injury to Stephen McPhail interrupted his side's rhythm, but overall he was happy with how they performed, saying: “I was pleased, I was very pleased, first half in particular I thought we passed the ball really well.

"When Stephen went off I thought we lost a bit of that and then got it back when we dropped Keith [Fahey] back in and pushed Ryan [Brennan] on a little bit further.

“Pat's are a good side. They're probably missing one or two as well tonight.

"They're as good a side as what's in it, with Dundalk as well.

"There are four or five teams and in fairness to Bohs they have had a fantastic start to the season as well.

“Everybody probably expected the other four teams to be there, but Bohs have split them all and done really well.

"It's a tough league, tough to win games in, but we're going in the right direction.” 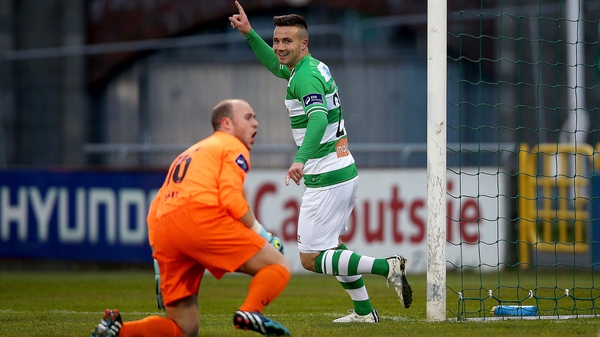 Mikey Drennan on mark as Shamrock Rovers grind out win