Celtic went eight points clear at the top of the Scottish Premiership with a perfunctory 2-0 win over bottom side St Mirren in Paisley.

Buddies goalkeeper Mark Ridgers made good saves from Kris Commons and James Forrest in the first half but the latter opened the scoring in the 63rd minute when he finished off a fine move from close range.

When Forrest's drive was blocked by the arm of St Mirren defender Victor Genev for a penalty in the 79th minute, midfielder Stefan Johansen slotted in the spot-kick to widen the gap over second-placed Aberdeen with nine games remaining for both teams.

Saints remain four points behind second-bottom Motherwell, whom they play on Tuesday night after the Steelmen face Kilmarnock on Saturday, and they proved to be awkward customers.

However, they need to get points on the board soon or they will find themselves in the Championship next season.
With a tough fixture schedule coming up, Hoops manager Ronny Deila took the chance to freshen up his side.

Kieran Sadlier made his first start for the Buddies as Marc McAusland and Yoann Arquin were also brought in, with Steven Thompson, Alan Gow and Sean Kelly listed among the substitutes.

Celtic had picked up 13 wins and a draw in their last 14 league matches against the Paisley side and there seemed little chance of St Mirren denting that impressive Hoops' record in the early stages.

After Stokes dragged an early drive wide, Commons had three attempts at making the breakthrough.

The first was saved by Ridgers at the near post, the second hit the side-netting and he should have scored the third.
A clever pass from midfielder Stuart Armstrong in the 25th minute left Stokes with only Ridgers to beat - but he blasted the ball straight at the St Mirren keeper.

Meanwhile, in the Celtic goal, Craig Gordon had been all but redundant until just before the half-hour mark when he stretched to save a Stephen Mallan header following a Sadlier cross.

Ridgers then denied Forrest after he had been set up by Commons to suggest it just might be the keeper's night - and indeed the home side grew in confidence as the match edged towards the interval.

In the 36th minute there was a Saints penalty claim when Mallan went down in the box under Armstrong's challenge but to no avail and when the ball broke to Arquin, his low drive from the edge of the box was saved by Gordon.

Aside from St Mirren midfielder Jim Goodwin picking up a yellow card for a reckless challenge on Parkhead captain Scott Brown there was little else of note before the break.
Celtic's goal was a touch of class in what was otherwise a scrappy start to the second half.

Brown took the ball from Commons and quickly threaded a pass through a packed penalty area to Matthews. When the Wales defender cut the ball back, Forrest bundled it past Ridgers to some relief from the travelling fans.

The points were sealed when referee Alan Muir pointed to the spot after Genev was adjudged to have handled Forrest's shot, with Johansen confidently knocking the penalty past Ridgers to keep the Scottish League Cup winners on course for the treble. 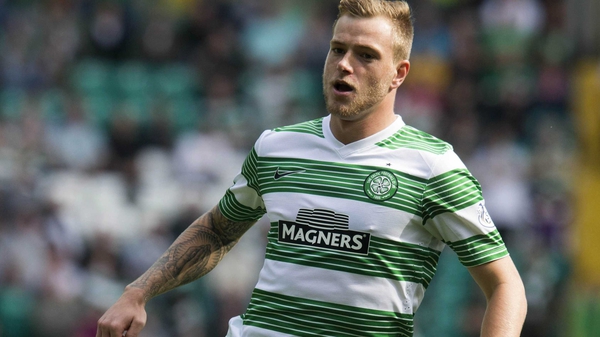