Dundee United went down without much of a fight as Celtic cruised to a 3-0 Scottish Premiership win in the fourth meeting between the clubs in 14 days.

Three previous three clashes, including a 2-0 Scottish League Cup final win for the Hoops at Hampden Park and a 4-0 win in a William Hill Scottish Cup replay, brought six red cards - four for the Tannadice men - amid a war of words.

However, first-half goals from former United player Gary Mackay-Steven, returning striker John Guidetti and defender Jason Denayer had United chastened, with the second half at Parkhead a non-event.

Ronny Deila's side moved five points clear of second-placed Aberdeen, who were held to a 1-1 draw with Dundeee, with a game in hand over the Dons and remain on course for the domestic treble.

The Celtic boss revealed the strength of his squad by bringing in a new attack force as midfielder Stefan Johansen returned after suspension.

Midfielders Mackay-Steven and Stuart Armstrong, who were ineligible against their former club in the previous cup ties, came back in with Guidetti.

Forward Anthony Stokes was suspended after being sent off in the William Hill Scottish Cup replay win, and James Forrest, Kris Commons and Leigh Griffiths dropped to the bench.

United full-back Ryan McGowan was also sent off in the last meeting but he was free to play after appealing his red card as defender Paul Dixon, after serving a one-game ban, stopper Jon Souttar and midfielder Charlie Telfer returned.

Despite the tension between the two clubs, the start could hardly have been more low-key.

Both teams had tip-toed around the pitch to no great effect when Mackay-Steven picked up a pass outside the box in the 16th minute from right-back Efe Ambrose.

The visitors showed no great inclination to press, leaving the Hoops winger time and space to fire in a powerful drive which made its way past a ruck of bodies before beating Tannadice keeper Radoslaw Cierzniak at his far post.

Nothing much of note happened until the 33rd minute when Guidetti doubled the Hoops' lead.

An intricate piece of play by the Hoops involving skipper Scott Brown and Johansen ended with the Swedish striker being set up by Mackay-Steven at the edge of the box before unleashing a left-footed shot which flew high past Cierzniak.

Johansen came close with a drive before a close-range shot was blocked by Cierzniak, with Mackay-Steven hitting the outside of the post with the loose ball.

Celtic's third goal came immediately before the break and after United midfielder Paul Paton had been deservedly booked by referee Kevin Clancy for taking out Mackay-Steven with a dreadful tackle on the right-hand side, just outside the box.

Johansen rolled the free-kick to Virgil van Dijk and when his shot was blocked inside the packed six-yard box, Denayer, with his back to goal, back-heeled the ball into the net.

United midfielder Ryan Dow replaced Calum Butcher for the start of the second half but the response from Jackie McNamara's side was limited.

On the hour mark, Van Dijk got back to block Nadir Ciftci's goalbound shot after slack defensive play allowed United's lone striker through on goal.

Celtic keeper Craig Gordon tipped a shot by Dow over for a corner moments later but the home side were in control.

The champions kept looking for more goals, with some close calls, but they settled for three and the three points to take them closer to their dream treble. 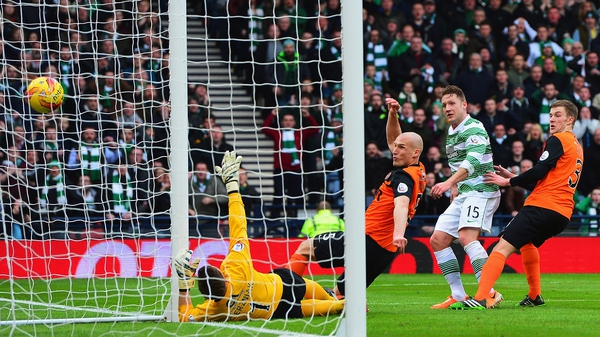