Crystal Palace recorded their fourth win in five Barclays Premier League away matches under Alan Pardew as they came from behind to beat Stoke 2-1 at the Britannia Stadium.

After going a goal down to Mame Biram Diouf's 14th-minute opener, Palace levelled in the 41st minute through a Glenn Murray penalty awarded contentiously when referee Andre Marriner adjudged Asmir Begovic to have fouled Yannick Bolasie.

They almost had another goal soon after the break as Scott Dann hit the post, while Stoke were denied a penalty after claiming in vain that Joel Ward had handled in the area.

A combination of the hosts' poor finishing and some fine saves from Julian Speroni ensured Palace hung on for the victory as Pardew chalked up yet another decent result in his new job.

Particularly good on their travels, the London outfit have won six of 10 league matches since Pardew took charge in January and if they had not already looked assured of safety, Palace certainly do now, sitting 11 points clear of the relegation zone in 11th place - one spot above his former club Newcastle.

Although Bolasie had an early shot blocked by Ryan Shawcross and also skewed a shot over the bar, it was the hosts who really settled first in the contest.

Charlie Adam looped a free-kick goalwards that Speroni punched over the bar, and the Scot then fired wide having collected the ball from a neat Stephen Ireland back-heel.

And just before the quarter-hour mark the Potters were in front as another Adam free-kick, this time struck low, took a deflection to sit up nicely for Diouf to stab past Speroni.

Soon after, Speroni spilled a cross and Pape Souare managed to get in the way as Peter Crouch attempted to tee up the loose ball for Diouf.

The Potters were looking comfortable but Palace issued a warning in the 29th minute when Zaha cut inside with a bit of trickery and fired wide.

Zaha was subsequently booked for putting his hands on Geoff Cameron, and the visitors were beginning to get a grip on the game.

An equaliser duly arrived - although the goal came in controversial circumstances. Bolasie burst forward, attempting to latch onto a ball from James McArthur, and collided with the out-rushing Begovic in the box.

The coming-together, seemingly a 50-50 challenge with Bolasie having quite a high foot and Begovic trying to punch the ball, prompted Marriner to book the Stoke goalkeeper and award a penalty which Murray smashed into the net.

Stoke frustrations were evident as they quickly picked up two more yellow cards - one each for Adam and Erik Pieters - before things got even worse for Mark Hughes' side with Palace snatching the lead.

This time, the home side were certainly guilty of shooting themselves in the foot, switching off at the back as Murray flicked on a long punt forward from Speroni. Zaha raced on to it, getting around Pieters and slotting past Begovic.

Palace looked to keep up the momentum at the start of the second half and McArthur, moments after being booked for diving in the area, sent an effort swerving wide.

The action switched to the other end as Speroni pulled off a point-blank save to deny Diouf, before Jason Puncheon ballooned a decent chance to extend Palace's advantage off target.

Palace continued to press with Bolasie almost punishing a Shawcross error, Dann's volley connecting with the woodwork and Murray failing to finish at the near post from a Souare cross.
Stoke replied by calling Speroni into action again, the Argentinian keeping out a shot from Ireland, who should have done better with the space he had.

Potters appeals for handball were dismissed by Marriner when Ward blocked a Diouf shot in the box, and Speroni then did well again to push away an Adam free-kick.

Stoke continued to knock on the door thereafter, but the equaliser would not come and their second successive defeat was confirmed. 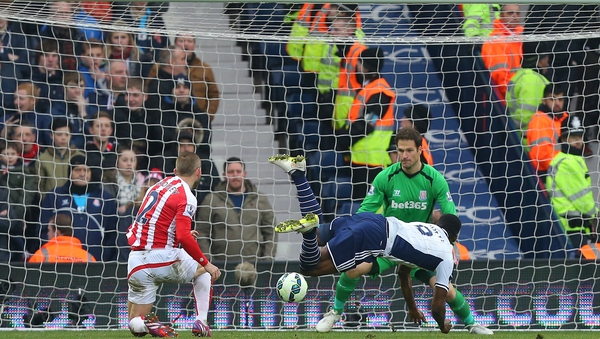