The striker's seventh goal of the season settled the game to move the Baggies 11 points clear of the Barclays Premier League relegation zone.

They were also denied a penalty after Craig Dawson appeared to be fouled in the box and Ideye had a goal disallowed.

The Potters, who remain eighth, were poor but Jonathan Walters did force substitute goalkeeper Boaz Myhill into a smart second-half save.

Ben Foster, Darren Fletcher and Stephane Sessegnon were all recalled for Albion as Myhill and Jonas Olsson dropped to the bench while Claudio Yacob was banned.

Ryan Shawcross returned for the first time since January after a back problem and replaced Philipp Wollscheid, who was out with a groin injury.

But, despite the return of their captain, Stoke were rattled early as Albion looked for the breakthrough.

Victor Moses fired over but the visitors were ragged, unable to gain enough possession or territory to make a meaningful impact.

And the Baggies took advantage after 19 minutes when Ideye ended his four-game goal drought.

It took some shocking defending from Phil Bardsley, though, to give Albion the lead as the defender backed off Ideye, allowing him to stoop and nod Craig Gardner's cross into the corner from 10 yards.

Albion deserved the lead and Stoke did little to suggest they would fight their way back before the break.

And they survived a scare when Ideye had a goal ruled out - correctly - for offside, after Begovic had spilled the ball in the 35th minute.

Begovic's mistake was symptomatic of the disjointed Stoke display with the hosts well on top.

But the Baggies suffered a blow 10 minutes into the second half when Foster was forced off after landing awkwardly, to be replaced by Myhill.

Berahino headed wide as the hosts reacted well but Stoke had improved since the break and began to pin their hosts back.

Myhill turned Walters' header over after 62 minutes before the goalkeeper and Gareth McAuley were forced into scrambling clearances.

It was a brief recovery from the visitors, though, as they faded badly.

Begovic produced a fine low save to deny Ideye a second with 25 minutes left and West Brom should have had a penalty 10 minutes later.

Dawson collected Sessegnon's knockdown only to be felled by Geoff Cameron but referee Michael Oliver ignored the claims.

The hosts had regained their composure after a second-half wobble and Myhill claimed Peter Crouch's header.

And Albion survived one final scare in stoppage time when Myhill clattered into Crouch just outside the area and was booked but the Baggies hung on. 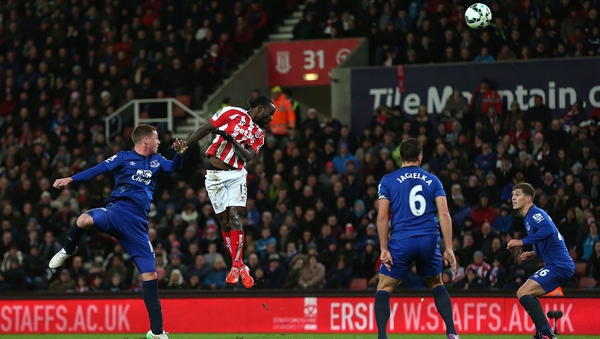