Chelsea were eliminated from the Champions League as 10-man Paris St Germain twice came from behind to win an ill-tempered last-16 tie on away goals at Stamford Bridge.

The first leg was drawn 1-1 and Chelsea's advantage grew when Zlatan Ibrahimovic was sent off for a late tackle on Oscar after 31 minutes.

Gary Cahill's strike nine minutes from the end of normal time was cancelled out by a bullet header from former Chelsea defender David Luiz, but the hosts went ahead for a second time through an Eden Hazard penalty early in extra-time.

PSG captain Thiago Silva, who conceded the spot-kick for handball, was denied from a corner by Thibaut Courtois but then netted with a header moments later to make it 2-2 on the night and send the visitors through.

The Frenchmen exited the competition last term to Chelsea on the away goals rule, but advanced to the last eight for a third straight season.

Jose Mourinho and Chelsea, meanwhile, are left to focus on their Premier League title bid.

PSG were fortunate not to be reduced to nine men in the first half when Luiz elbowed Diego Costa off the ball.

Striker Costa was then denied a penalty after a trip by Edinson Cavani as Dutch referee Bjorn Kuipers had three big decisions to make within 12 minutes and arguably got all of them wrong.

Jeremy Clarkson, the Top Gear presenter watching on after his suspension for his involvement in a fracas, may have enjoyed PSG living up to their pre-match billing as the "most aggressive" side Chelsea have played this term.

The visitors had begun well in their bid to emulate Bradford, the League One side who inflicted Chelsea's only prior loss at Stamford Bridge this term.

Cavani hit a post for the visitors after rounding Courtois, who then saved from Javier Pastore as PSG created the better chances.

Costa might have been sent off for a foul on Silva and a confrontation with Luiz. As it was Costa and Luiz received only yellows.

Cahill converted after a corner and Luiz headed in before Silva was adjudged to have handled and Hazard converted the resulting penalty.

Courtois made a miraculous save to deny Silva before the PSG skipper's looping header from the resulting corner beat the goalkeeper.

It was unusual to see Chelsea concede two set-piece goals and they were made to pay after being second best in the contest.

The Capital One Cup winners exited the competition and there is the distinct possibility of no English presence in the quarter-final draw on March 20, unless Arsenal and Manchester City can overturn deficits next week. 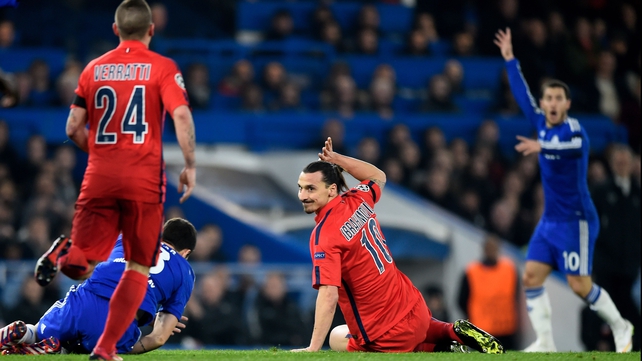 The controversy which overshadowed the first leg at Parc des Princes three weeks ago - when a commuter was subject to racist abuse on the Paris Metro - was confined to the pitch in a fractious encounter.

Ibrahimovic saw red, dismissed for a challenge on Oscar which looked more clumsy than malicious as he attempted to pull out of the 50-50 tackle.

Referee Kuipers was quick to make his decision, although he was surrounded by nine Chelsea players as he pulled the card out of his top pocket and a melee ensued with Luiz and Costa prominent and Thiago Motta booked.

Ibrahimovic now has more Champions League red cards than goals against English clubs - four versus three in 18 matches, all against Arsenal.

The Swede was out injured when Demba Ba's last-gasp goal earned Chelsea progress to last season's semi-finals on away goals - overturning a 3-1 first-leg deficit - and Mourinho's men had another opportunity to exploit the striker's absence.

Despite the return of key midfielder Nemanja Matic following suspension, Chelsea were overrun at times.

Luiz made his presence felt on his return to the club who sold him for £50million last summer, but often it was illegally.

Luiz fouled Hazard before Ibrahimovic's dismissal and afterwards, behind the referee's back, felled Costa with his right elbow as the striker surged towards the box.

Costa attempted to take his revenge by bulldozing through the PSG defence, charging along the 18-yard box before surging into the area.

The striker felt he was tripped from behind by Cavani, but Kuipers disagreed.

Willian, on at half-time for Oscar, tried to catch PSG goalkeeper Salvatore Sirigu off guard with a free-kick to the near post, but the visitors came closer when Javier Pastore fed Cavani, who skipped round Courtois and shot against the post.

Courtois saved from Pastore before Costa's sliding challenge on Silva was followed by a coming together between Luiz and the Chelsea striker. 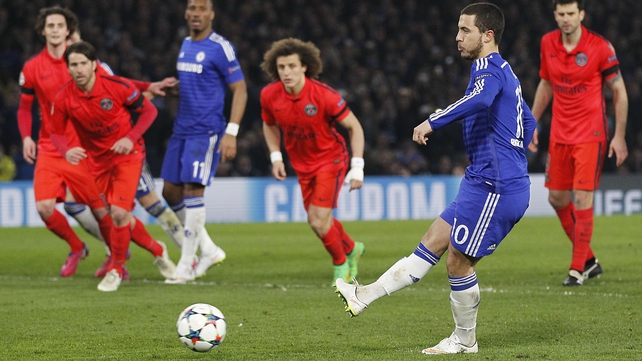 Luiz feigned being the victim of a headbutt, with both players booked and Marco Veratti following when he caught Hazard, sparking another altercation.

Ramires forced Sirigu to save and Cahill scored with a crisp half-volley from the resulting corner after Costa sliced the ball into his path.

Courtois saved from Ezequiel Lavezzi but was beaten by Luiz's header for the equaliser.

Luiz said prior to the first leg he would not celebrate if he scored against Chelsea, but broke the vow as the PSG bench erupted.

Costa pushed Marquinhos over unseen by Kuipers as Chelsea's numerical advantage remained for extra time, when PSG failed to deal with the striker's cross.

The ball barely brushed Silva's hand ahead of Kurt Zouma's head, but PSG had few complaints about the spot-kick award and Hazard rolled the ball in.

Courtois saved Luiz's 35-yard free-kick and then made a fine save from Silva before being beaten by the defender as Chelsea exited the competition. 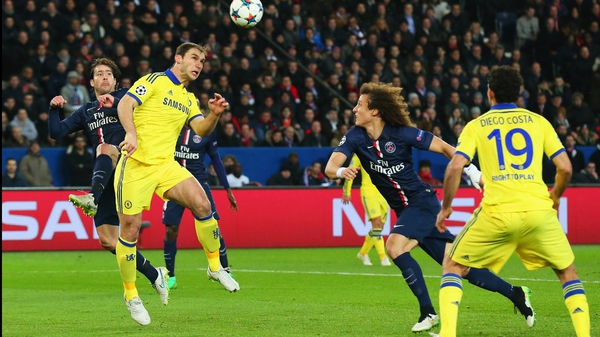