Jose Mourinho's men are well placed to advance to the quarter-finals after Ivanovic netted a vital away goal, although Edinson Cavani equalised and PSG showed enough for Chelsea to be wary in the second leg on 11 March.

Chelsea advanced to the semi-finals at PSG's expense last term on away goals after losing 3-1 in Paris and Demba Ba's last-gasp strike in the return in London.

The Blues had won just once in six prior attempts on French soil, at PSG in Mourinho's first European match as boss in September 2004.

With striker Diego Costa restored following his disputed three-match ban for stamping on Liverpool's Emre Can and returns for goalkeeper Thibaut Courtois, defender Gary Cahill and playmaker Cesc Fabregas, Chelsea were at full strength against an injury-depleted PSG, who started with former Chelsea defender David Luiz in midfield.

Luiz stated on the eve of the match that Chelsea were a better team than last season and they fared better than on their last trip to Paris.

Chelsea's bus became stuck entering the stadium and Zlatan Ibrahimovic caused the visitors all kinds of difficulties once the match began.

The episode with the bus led to jokes Chelsea would "park" theirs and deploy defensive tactics.

The shock FA Cup exit to League One Bradford granted Chelsea a rare free weekend and five days' preparation for PSG.
The players, with Cahill chosen ahead of Kurt Zouma, stuck rigorously to Mourinho's instructions.

The Blues, wearing yellow, harassed and harangued their opponents, but still PSG found gaps and Courtois was forced to justify his selection with two saves in quick succession.

Cavani chipped the ball for the onrushing Matuidi, whose powerful header was repelled by a strong Courtois hand.
Matuidi's cross was then met by Ibrahimovic, climbing high above John Terry, but the header went into the ground, losing its power and Courtois saved.

Fabregas, starting after shaking off a hamstring problem and illness, timed his run to claim a return pass from Willian was impeded on the edge of the PSG box, but nothing was given.
It was an early sign of a frustrating evening in attack for Chelsea.

Chelsea struck after Hazard drew a foul - not for the first or last time in the match - from Ibrahimovic.

The initial free-kick was half-cleared and the ball found its way to Terry on the left.

His cross was flicked on by Cahill and an unmarked Ivanovic struck.

Ibrahimovic blasted a free-kick over in first-half stoppage time after Luiz appeared to improve the angle by sweeping up the referee's vanishing spray and shifting it a yard inside.

Chelsea's resistance was broken when Luiz spread the ball to the left and Matuidi crossed for Cavani, who had stolen away from Cahill and headed down and in. 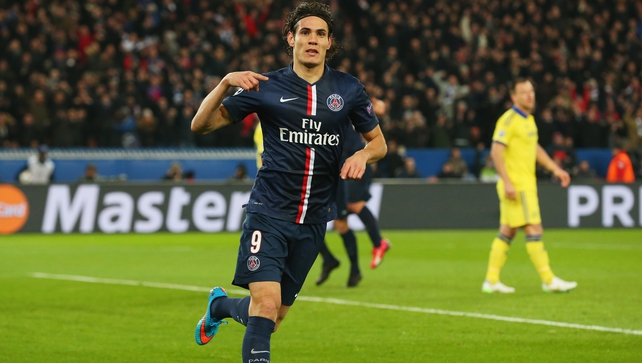 PSG found another way through, but Courtois saved from Ibrahimovic and the follow-up shot from Lavezzi was blocked by Cesar Azpilicueta.

Chelsea were being stretched and becoming frustrated.
The increasingly isolated Costa pushed arch-irritant Luiz firmly in the chest.

Ivanovic was then booked for rugby tackling Cavani after being beaten on the wing and Fabregas was yellow carded for a clumsy trip on Matuidi.

Hazard was trying to find an opening, but if he was not fouled, he was knocked off balance.

Costa, Fabregas and Willian all departed, with Loic Remy, Oscar and Juan Cuadrado replacing them as Mourinho sent on fresh legs to continue Chelsea's pressing game.

But still PSG had a chance of a winner only for Courtois to save an Ibrahimovic header in stoppage time. 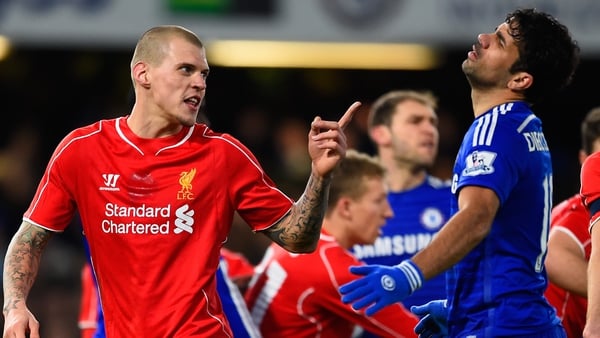