Peter Crouch scored the winner a minute after coming off the bench as Stoke defeated Hull 1-0 at the Britannia Stadium.

Crouch made an instant impact after being thrown on by Potters boss Mark Hughes with 20 minutes to go as the striker rose in the box to meet a fine delivery from fellow substitute Charlie Adam and send a header over Allan McGregor into the net for his ninth goal of the season and fourth in four appearances in all
competitions.

Adam - following his introduction at half time - had already been doing his best to liven up what had been a poor Barclays Premier League contest prior to the break, going close to breaking the deadlock in the 58th minute with a free-kick that whistled narrowly wide.

The result is a sixth win in 11 league games for 10th-placed Stoke, while Hull's recent unbeaten run has been halted at three games.

Having failed to build on their draw at Manchester City and subsequent back-to-back wins over Aston Villa and QPR, Steve Bruce's Tigers - without injured top-scorer Nikica Jelavic - remain 15th, four points clear of the relegation zone.

Despite both being in good form of late, the two sides conjured a thoroughly disappointing first half between them.
Stoke midfielder Stephen Ireland had a shot blocked by Alex Bruce in the third minute, and Steven Nzonzi then dragged a low effort well wide as the hosts looked to try to impose themselves.

When Ireland and Jonathan Walters got in each other's way as they both tried to tee up a shot from the edge of the area in the 18th minute, it summed up the quality on show.

Soon after, Hull made their first real foray forward as Sone Aluko outfoxed Philipp Wollscheid with ease, got into the box and prodded the ball wide of the far post from a tight angle.

Ireland escaped punishment for a rash-looking challenge on David Meyler, and moments later Erik Pieters was booked by referee Neil Swarbrick for a challenge on Gaston Ramirez that appeared nowhere near as bad.

Just after the half-hour mark a glancing Walters header was cleared behind for a Stoke corner, and when it was delivered, the ball came to Phil Bardsley, who hit the deck under the attentions of Aluko and Jake Livermore as he tried to shoot. Despite shouts for a penalty from the stands, play was allowed to continue and Ireland ended up looping a shot to McGregor.

A firm Maynor Figueroa tackle then left Ireland limping but prompted no action from Swarbrick, who was increasingly drawing the ire of Stoke's fans and Hughes - something that stepped up a notch when he subsequently yellow-carded Victor Moses following the winger's innocuous-looking collision with Tom Huddlestone.

Ireland was substituted at the interval, with Adam coming on in his place, and Swarbrick soon had his yellow card out again, booking Meyler for felling Bardsley. The resulting free-kick from Adam was punched away by McGregor, and soon after the midfielder drove forward and lashed a shot wide.

Adam continued to make a considerable impact as he curled another free-kick inches off-target.

And he then helped Crouch - on for Mame Biram Diouf - to swiftly make a mark as well, lofting a delightful ball forward for the tall frontman, who guided it expertly into the net.

Hull had brought on strikers Dame N'Doye, scorer of two goals in his last two games, and Abel Hernandez, but they could not change the course of the contest.

A late chance fell to Paul McShane in the Stoke area, but his shot was well intercepted by Marc Wilson. 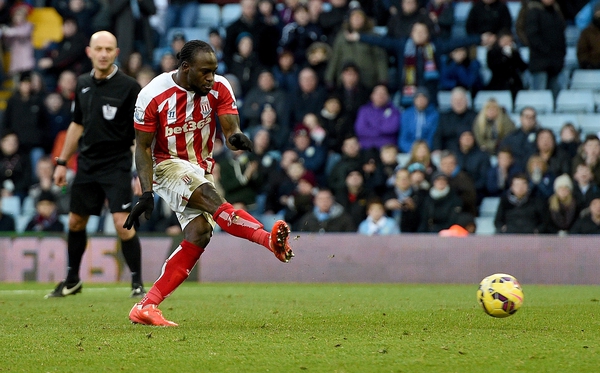