Everton comfortably completed their progress into the last 16 of the Europa League as a Romelu Lukaku brace helped them beat Young Boys 3-1 at Goodison Park, sealing a 7-2 win on aggregate.

Lukaku had proved the scourge of the Swiss side during the first leg of the last-32 tie in Bern last Thursday, the Toffees' £28million club record signing netting three times in their 4-1 victory.

And he was again here as the Merseysiders once more came from behind on the night, the 21-year-old Belgium striker equalising with a penalty in the 25th minute after Sekou Sanogo's close-range 13th-minute opener, then volleying home on the half-hour mark to take his tally for the season to 15 goals.

Everton subsequently went in 3-1 up at the interval, just as in leg one, after Kevin Mirallas slotted in three minutes from the end of the first half having latched onto a superb Darron Gibson through-ball.

The second half was then a simple stroll for the home team towards Friday's draw for the last 16.

Everton boss Roberto Martinez had stressed before this game the danger of taking a complacent attitude against a Young Boys side who responded to their first-leg defeat by beating Swiss league leaders Basle 4-2 at the weekend.

With Barclays Premier League trips to Arsenal on Sunday and Stoke next Wednesday to think about, Martinez made five changes to his first XI from Sunday's 2-2 home draw with Leicester - but it was still a fairly strong-looking team that started the match.

However, a casual approach did seem in evidence from the hosts early on as Young Boys made a vibrant start which soon yielded a goal.

Toffees goalkeeper Tim Howard had been one to keep his place from the Leicester contest despite making errors that had led to the concession of two goals, and he had another shaky moment here as Raphael Nuzzolo's volley was headed his way by Milan Vilotic.

The United States international could only parry the effort straight to Sanogo, who tucked home from close-range, with Everton appealing in vain for offside.

Young Boys continued to pressurise and almost had a further goal back in the 21st minute as Scott Sutter's header hit the crossbar.

But then Lukaku - another man retained from the weekend - repaid the faith shown in him as Everton bounced back to put the outcome of the tie beyond any lingering doubt.

First, the frontman's backheel played in Steven Naismith, who was brought down by goalkeeper Marco Wolfli. Lukaku sent the resulting spot-kick confidently into the bottom corner.

He was then on hand five minutes later to meet a decent Luke Garbutt cross from the left with a volley into the turf that again ended up in the corner of the net.

Young Boys looked understandably deflated and Everton kept their foot on the pedal, with Gareth Barry firing over.

Then, after cheers erupted around the ground at the news of Liverpool's Europa League elimination and the referee had broken up a skirmish between Naismith and Sanogo, Martinez's men extended their lead as Gibson - who had set Garbutt free for the second goal - sent an expert pass through the visiting defence which Mirallas took on and converted coolly.

Lukaku looked eager for another treble as the second half got under way, but after having a shot blocked by a defender, he was substituted for Arouna Kone.

Mirallas then had a shot saved by Wolfli's leg, Kone struck straight at the goalkeeper when he might have done better, and a Naismith attempt was also gathered.

Kone almost made it another 4-1 win in the 76th minute as he fired against the post, and fellow substitute Leon Osman had a header ruled out in the dying seconds for a push, but Everton's job had long been done by that point. 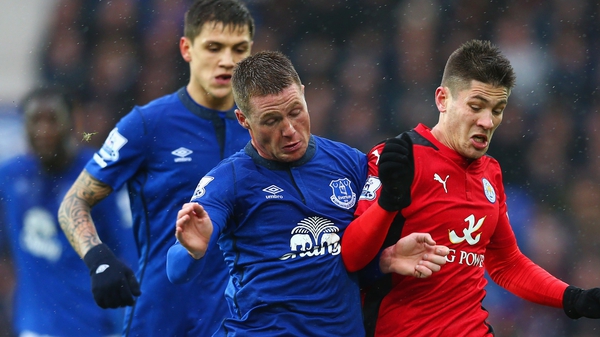