James McCarthy wants Everton fans to keep faith with their team although he admits performances have not been good enough this year.

Roberto Martinez's team won 13 matches at home last season, but this term Everton fans have only watched their team defeat West Ham, QPR and Aston Villa at Goodison Park in the Premier League.

The latest home disappointment came on Sunday when Everton needed an 88th-minute own goal from Matthew Upson to allow them to snatch a point against bottom side Leicester.

Ironic cheers rang around the ground when the referee blew his whistle to signal the end of a largely dull first half and McCarthy understands why some supporters were unhappy.

"It was a very frustrating day," the Everton midfielder said after the 2-2 draw.

"It has been a frustrating campaign, especially in the league. It's frustrating as a player. As a fan it's no good watching it either.

"We want to get maximum points at home. The fans have come out in their numbers and we are trying to kick up this table.

"Every one of us knows that we need to address this. We know it is not good enough.

"We go again on Thursday (in the Europa League) and the fans need to stick with us. I am sure we will bounce back."

Despite having won just once in their last 10 league matches, Everton are still 12th in the standings.

"We don't want to be floating around in the mid-bottom area of the table. We want to get as high as possible," the Republic of Ireland international said.

"The gaffer has said some things in the changing room but we will need to address a few things."

Next up for Everton in the league is a trip to Arsenal, but first they must ensure they progress to the last 16 of the Europa League by defending the three-goal lead they have over Young Boys.

Everton put on one of their best displays of the season to hammer the Swiss team 4-1 in the first leg, and McCarthy wants to see a similar display at Goodison on Thursday in the return fixture.

"We have a big lead but we won't take any prisoners," he said. 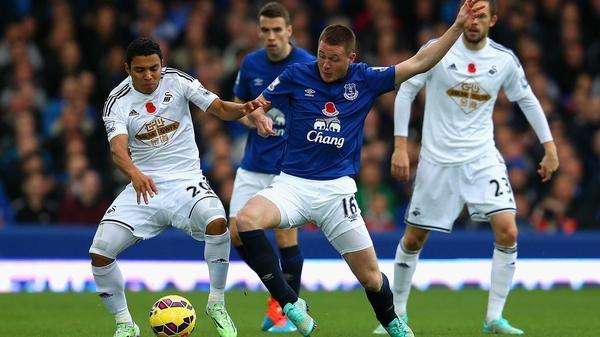