One of the two would-be candidates to face Sepp Blatter for the presidency of FIFA has said he welcomes the announcement by Prince Ali Bin al-Hussein of Jordan that he will run for the position.

Prince Ali announced his plans to run yesterday, saying he believed it was time to shift the focus away from administrative controversy and back to sport.

He joins Frenchman Jerome Champagne, a former member of FIFA’s executive committee, who announced his plans to run last January.

Champagne said that the Jordanian’s plans were good news, and that he looked forward to hearing more details of his proposals for the role.

“It’s not about persons, it’s not about fights between institutions. It’s about programmes, visions and platforms. So far, I’m the only who has presented and put on the table a detailed programme with concrete measures which can be financed, which can be implemented.”

He said that so far the other potential candidates had produced only slogans, and called for a US-presidential style debate once all the candidates were known.

“You [would] have the candidates behind lecterns and the fans can ask questions through moderators. That’s what we need in FIFA.”

He disagreed with the notion that a bigger number of candidates would be a benefit to the incumbent, Blatter, because it would divide an opposition vote.

“I don’t think the question in this election is pro- and anti-Blatter,” he said.

“So the situation is not a black and white situation. It’s much more complex.”

Meanwhile, Prince Ali was hailed as a “credible” candidate to run for the position by English FA chairman Greg Dyke.

Dyke and UEFA president Michel Platini have both welcomed his decision to stand.

Dyke, who has previously called for Blatter not to run again, said: “Personally I welcome Prince Ali's decision to stand for the FIFA presidency. It is very important that there is a credible candidate standing against Mr Blatter and Prince Ali is certainly that.”

Platini added: “I know Prince Ali well. He has all the credibility required to hold high office. We now await his proposals and his programme for the future of football.”

The FA board will make the decision about who to support once nominations close on 31 January but Prince Ali already has close ties with the organisation.

Britain's FIFA vice-president Jim Boyce said it was important for the democratic process for there to be a proper election in May.

Boyce told Press Association Sport: “I have known Prince Ali for the last three and a half years and he is someone who is held in the highest esteem and is a very credible person.

“He has decided he will stand for the presidency of FIFA and it gives the 209 associations now the opportunity to decide, and another choice. It's a democratic process and it should make the elections at the end of May very interesting.”

Prince Ali - a 39-year-old Sandhurst-educated son of the late King Hussein of Jordan - is understood to have spoken with Platini several days ago to inform him of his intentions.

Platini is said to be “very pleased” by the announcement - he has already said he will not support Blatter for another term - and will now consult with the European associations.

Prince Ali has positioned himself as a leading reformer of FIFA and was among those calling for the Garcia report into World Cup bidding to be published in full.

He said in a statement: “I am seeking the presidency of FIFA because I believe it is time to shift the focus away from administrative controversy and back to sport.

“This was not an easy decision. It came after careful consideration and many discussions with respected FIFA colleagues over the last few months.

“The message I heard, over and over, was that it is time for a change. The world's game deserves a world-class governing body - an international federation that is a service organisation and a model of ethics, transparency and good governance.” 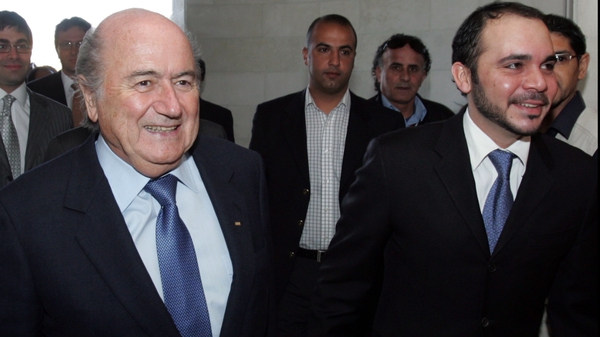