Former Derry City manager Roddy Collins has said he was “embarrassed” by the quality of play in the FAI Cup final yesterday and that there is a delusion over the calibre of players.

Speaking to RTÉ Radio this morning, Collins said it was “brilliant, and well deserved” that St Patrick’s Athletic had bridged their 53-year gap for the Cup and called them a “fantastic club”.

However, he slated the quality of football in the final, and suggested it was symptomatic of a wider malaise in the Irish game.

“It was a terrible affair,” Collins said of the final.

“And at the end of the game he said to me ... ‘There’s not one of those players would get into my team’.

“That was disappointing for me, and that’s an expert opinion. So, you know, we’re a little bit deluded.”

Collins said that the standard of football in the final was “par for the course now” and that overall it has gone down.

“That’s disappointing. People have this perception that we have players in our leagues that could walk into Championship clubs.

“You get the odd one - there is one kid gone to Hull [Brian Lenihan] – you get the odd one, now and again, but yesterday, for what was on display, I was disappointed and I felt a bit embarrassed, to be honest with you.”

Collins bemoaned the demise of professionalism and low attendances at League of Ireland games, contrasting it with the high numbers seen at GAA games.

“When you go to Croke Park and see a full house for All-Ireland hurling and football finals, and you go to Lansdowne Road or the Aviva Stadium yesterday and not even 15,000 people there: it’s really depressing.”

Collins identified a number of factors which he felt contribute to the difficulties faced. He said that any high-quality Irish player usually moved to England by the time they were 15 or 16.

"I was disappointed and I felt a bit embarrassed, to be honest"

“So what you get in our league are players who couldn’t make it in England as kids, and players that were in England who didn’t really achieve coming home, trying to re-establish themselves as professional footballers. And that’s what you’re dealing with. That’s the sad fact of it.”

He said better administration and a higher profile would improve matters, and decried the state of facilities at many clubs.

“The facilities are disastrous,” he said.

“There are clubs in the league – and I won’t name them, because good people run these clubs – and I’ve went in the dressing-rooms 30-odd years ago, and [then] I’ve been in them recently, and the same tiles, and the same problems are still there.”

Collins claimed there was a top-end club - he did not elaborate on which division they were in - who last week had trained in the dark after their floodlights went out due to a lack of diesel.

“They trained in the dark, three days before they played one of the most important games – I mean, that’s scandalous.”

Roddy Collins and John Still,two gurus of the game,you would be better off with Stevie Wonder at it! 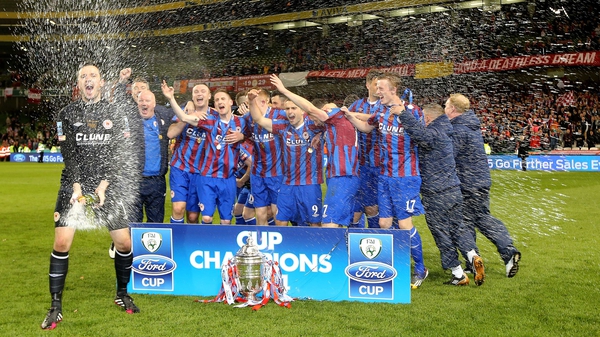