The Inchicore club's victory has ended Saints' 53-year wait for Cup glory and two Fagan goals in the 52nd minute and in injury time ensured that Liam Buckley's side secured the victory.

Derry piled the pressure on St Pat's after going behind early in the second half but could not find a way through the disciplined St Pat's defence before Fagan wrapped things up with his last-minute strike.

The Candystripes began on the offensive, with Saints Sean Hoare booked for a foul on Rory Patterson inside two minutes and Ryan McBride headed over the top from the resulting free kick.

St Pat’s settled well, though, and Fagan had a double sight of the Derry goal in the eight minute. The Candystripes failed to clear a Killian Brennan free kick into their area with Fagan’s first effort parried away one-handed by Ger Doherty before the striker latched onto the rebound to drive the ball wide of the far post from an acute angle.

Doherty rescued Derry again after 14 minutes, smartly racing from his line to save at the feet of Fagan who had been played through from deep by Hoare. Conan Byrne shot the rebound wide.

A Derry counterattack through Michael Duffy down the left, stretched Saint three minutes later and the cross found the head of Patterson who was well off target.

Paddy McEleney then caught a glimpse of the Pat’s goal as Doherty’s long punt skimmed off a defender’s head, but his toe-poke was high and wide.

The Derry defence was then caught square when Ian Bermingham was played in behind on the left, but his low cross was scrambled clear by Aaron Barry.

But for a heavy first touch, from another fine Hoare ball over the top after 31 minutes, Fagan was almost in on goal as the Dublin side began to enjoy more of the ball.

Then in perhaps the chance of the first half on 39 minutes, Fagan was inches wide of the far upright with a low, left-foot shot after Kenny Browne nodded the ball through to him when Derry failed to clear St Pat’s fourth corner of the afternoon.

That was forgotten within six minutes of the second half when Fagan put St Pat’s deservedly in front.

Brennan and Byrne combined to put Fahey away on the right. The Republic of Ireland international’s pullback was controlled by Fagan before the striker spun and got away a scuffed shot that deflected off McBride to go in off the butt of a post as Danny Ventre failed to clear on the line.

In response, Patterson might have done better than blaze a volley over the top six minutes later.

But it should have been 2-0 in the 63rd minute in a swift Pat’s counter.

Fahey ran some 40 yards, picking out Fagan with a sublime diagonal ball, only for the striker to side-foot tamely wide.

Chasing the game, Derry carved out their best chance in the 71st minute. Stephen Dooley’s run and cross found Philip Lowry in the area to set up substitute Barry McNamee whose weak shot was easy for Brendan Clarke.

Seven minutes later, Patterson headed just over the bar from Michael Duffy’s cross as St. Pat’s were defending deep inside their own half.

But that was as good as it got for City as they were caught with a sucker punch in the third minute of stoppage time.

Little seemed on as Barry Molloy looked set to tidy up Hoare’s headed clearance. But the Derry skipper mis-kicked to allow Fagan in to shoot past Doherty for his 27th goal of the season to send the Saints faithful behind the goal delirious. 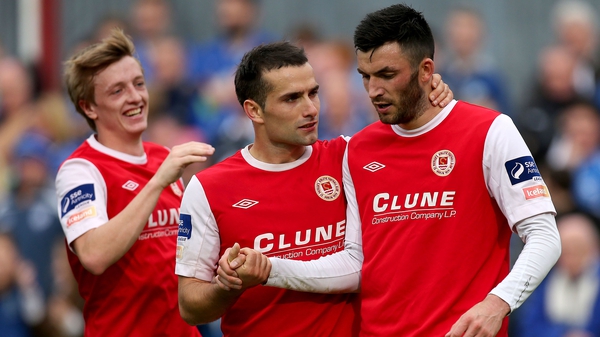