Limerick enjoyed a 1-0 win over Sligo Rovers in the SSE Airtricity League Premier Division in their final home game of the season.

Rory Gaffney struck eight minutes into the second half to hand the Shannonsiders the win in monsoon-like conditions at Thomond Park.

Sligo had their first sight on goal in the 20th minute. Danny Ledwith's free-kick from the right fell kindly for Danny North, but he failed to make significant contact as the ball fell easily for Lims goalkeeper Ali Abass.

North got the slightest of touches to another Ledwith free shortly after, but the former Grimsby man's efforts were in vein as the ball was comfortably gathered by Abass.

Some good work from Lee Lynch, another of the former Sligo contingent, led to Gaffney getting away his shot on 40 minutes. The ball deflected off the leg of a Rovers defender before being cleared to safety.

Sligo's Seamus Conneely had to be alert to block away Agyemang's effort from the resulting corner, with Brush stranded.

The home side captured the lead eight minutes into the second half.

Patrick Nzuzi's cross from the right was inch-perfect as the Blues' top scorer Gaffney nodded the ball beyond Brush from close range.

Martin Russell's men had a penalty appeal turned down in the 57th minute.

Ian Turner looked to have been fouled inside the Rovers area by Evan McMillan, but referee Kevin O'Regan adjudged Turner to have dived and booked the Limerick midfielder.

Lynch almost caught Brush unawares in the 62nd minute, but the Bit O'Red number two was alert enough to take hold of Lynch's bending effort after Gaffney stepped over the ball.

Brush was on hand moments later to block down Lynch's shot after a slip from McMillan.

Gaffney rifled over a vicious half-volley on the turn in the 72nd minute as the rain continued to batter Thomond.

Abass did just enough to touch Ledwith's curling free-kick over minutes later. He repeated the heroics a minute later when he denied Rovers substitute Gary Armstrong.

Raffaele Cretaro was next to test Abass with twelve minutes remaining, but again the Limerick keeper was equal to the Sligo assault.

Limerick sub Shane Tracy was denied by a good save from Brush late on, while Tracy also suffered a similar fate one minute into added time. 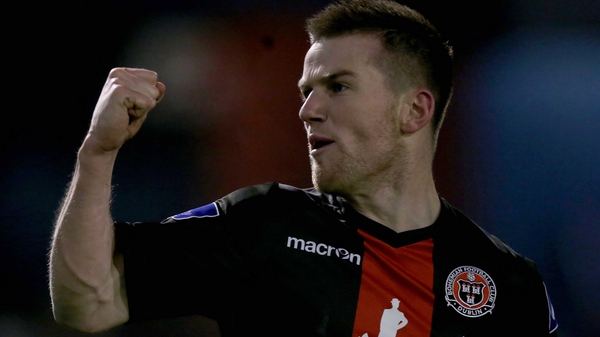