Dundalk took a huge step towards securing the SSE Airtricity League Premier Division title when they took advantage of a controversial sending off at Athlone Town Stadium to record a 3-0 victory over their hosts.

Two fantastic saves from Ryan Coulter prevented Dundalk from taking the lead early in the first half but they were handed the initiative when Brian Shortall saw red for an incident involving Dean Massey.

The Lilywhites made their numerical edge count with two goals from Patrick Hoban early in the second half and an exquisite volley by Richie Towell as the game crept into injury time.

Possession may have been evenly shared in the early stages, but Dundalk showed far more cutting edge when they had possession in key attacking areas and but for the brilliance of Ryan Coulter in the Athlone goal, the Louth side would have been comfortably in front long before Shortall’s dismissal.

Just five minutes had elapsed when a momentary lapse in concentration in the Athlone defence allowed Brian Gartland to get a clean header on Darren Meenan’s free kick from the right flank and it took incredible reflexes from Coulter to deflect the eight-yard strike over the crossbar for the game’s first corner, the first of six for Dundalk on the night. 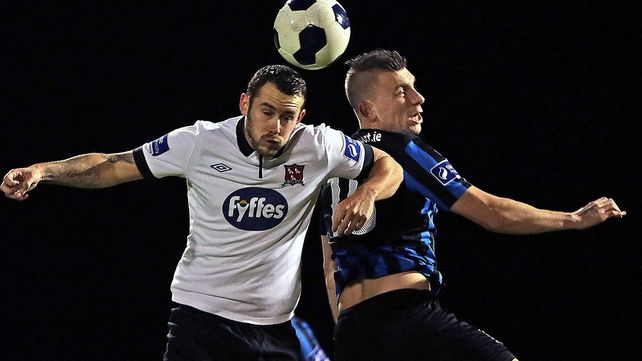 The combination of Daryl Horgan and Dane Massey down the left flank cause Athlone numerous problems over the course of the first half and they linked up to send several excellent deliveries into the Athlone penalty area during the opening moiety, deliveries which forced Derek Prendergast and particularly Alan Byrne to make several vital headers clear.

However, one such clearance was well met by a Seán Gannon volley from the edge of the area and while the initial strike was directed well wide of the target, Byrne got a vital touch on the edge of the six yard box and again forced Coulter into a wonderful save.

Having survived those two near misses, Athlone settled into the tie and as the clocked ticked down towards the interval it looked as if they had sailed through some of the choppiest waters in the match.

Everything changed, however, when what looked like incidental contact between Massey and Shortall on the touchline saw the Dundalk player fall to the ground holding his face, causing Tomás Connolly to show a straight red card to the Athlone defender. 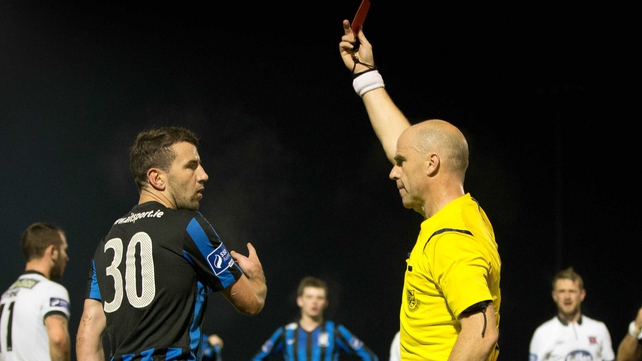 Shortall clearly raised his arm and made some contact with Massey, but the vehemence with which he and his colleagues protested the decision illustrated how they felt that Massey overplayed the incident.

His dismissal roused the Athlone players and their supporters for the remainder of the half and they could in fact have stolen a lead shortly before the interval when Kealan Dillon and Philip Gorman combined down the right wing to send a tantalising low delivery across the face of the Dundalk goal.

Derek Doyle won a straight foot race with Gannon to get to the ball first, however, it sat up at an awkward height for the Athlone player and bounced off his knee, deflecting wide of the target.

That was to be as good as it got for Athlone, however, as they fell behind after just sixty seconds of play after the restart.

Meenan, who ran riot for Dundalk throughout this tie and particularly in the second half, was the provider and his right wing cross was met by Hoban at the far post.

Athlone Town failed to pick up the Dundalk striker and he had the easiest of tasks to touch the ball down and slam it into the roof of the net. 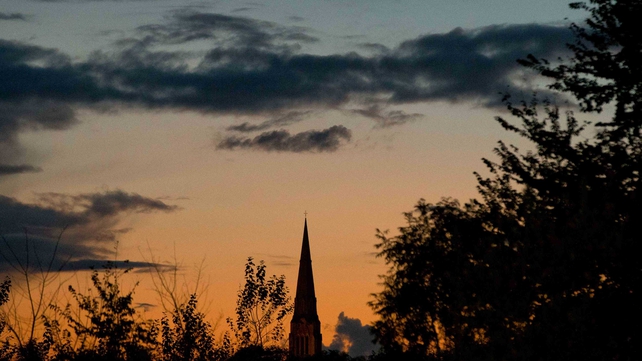 Ten minutes later any lingering hopes that the home side may have entertained were crushed when Hoban added his second, slipping the ball underneath Ryan Coulter from six yards out.

Again Meenan was the provider when he sent a low delivery into the striker and with all the composure that one would expect of a player seeking his 19th goal of the season, Hoban calmly took Alan Byrne out of the game with a faked shot and then found the net with an accurate low strike.

Athlone continue to battle gamely in a bid to salvage something from the tie but they were now badly exposed at the back every time they conceded possession and Dundalk could easily have added several more on the counter attack.

Subsitute Donal McDermott was particularly unlucky not to add a third goal when he was sent clean through with just the keeper to beat, but his meek attempt at a lob was easily parried by Coulter.

When the third goal finally came, it was a strike of real beauty, delivered by Dundalk talisman Richie Towell and supplied yet again by Meenan. A right-wing corner fell perfectly for the Dundalk midfielder and from the edge of the penalty area, he placed a side footed volley into the bottom corner of the net.

It was a goal worthy of league champions, an accolade that is within touching distance for Dundalk after this result. 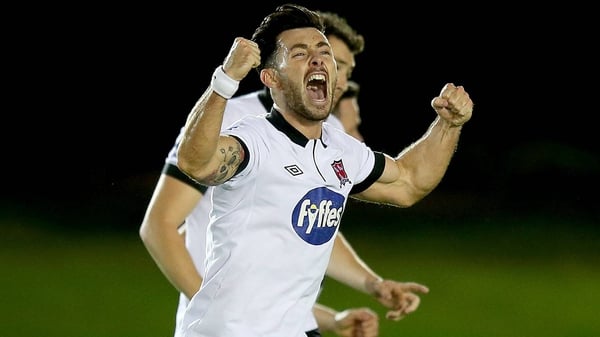