Dundalk moved one step closer to a first title in 19 years as they comfortably defeated relegation-threatened UCD 2-0 in the SSE Airtricity League Premier Division at Belfield.

Goals in either half from Richie Towell and Pat Hoban ensured the Lilywhites maintained their three-point advantage over second-placed Cork City with just four Premier Division games remaining.

Stephen Kenny’s side, who last week won the EA Sports Cup - their first piece of silverware since 2002 - dominated proceedings from start to finish and while the scoreboard may not reflect their complete superiority, none of the healthy travelling contingent will care one bit. “We’re going to win the league,” they sang throughout.

Any nerves were quelled in the tenth minute as Towell fired the visitors into the lead, albeit via the aid of a deflection off the helpless Hugh Douglas.

It set the tone for the evening and while it could have been a procession thereafter, the points were only secured 20 minutes from time.

Hoban skipped his way past a couple of challenges before cutting in from the left and unleashing an unstoppable drive past Conor O’Donnell at the near post.

It was the striker’s 17th league goal of a memorable season and arguably his finest - he left the field with the match ball under his arm.

Conversely, UCD are a side on a slippery slope and are perilously close to submersion. The Students are winless in eight games and it’s difficult to see where their next point will come from; they never looked like getting anything from this game.

Indeed, it was always going to be an arduous task for them to arrest their slump against Dundalk but this, their seventh loss at home, leaves their Premier Division status hanging by a thread with a handful of games remaining.

Their run-in isn’t particularly kind and with an embattled Athlone side gaining ground with every passing week, UCD need a change in fortunes, and quickly.

It would only be natural, at this stage of the season, for an element of edginess to creep into Dundalk’s means but they were purposeful from the off and quelled any early nerves.

Although their nimble interchange and precise passing has been the cornerstone of their title assault, there is a steely determination about the Lilywhites.

UCD had barely stepped out of the dressing room and they were on the back foot. When Andy Boyle was afforded far too much time and space on the edge of the area to tee up Towell, the only question was how many would the visitors put past O’Donnell.

As it was, they remained rigid and when other sides may have crumbled in the face of Dundalk’s dominance, Callaghan’s side warmed to the task and grew in stature as the game wore on.

They lack firepower going forward, however, and Robbie Creevy’s close-range volley was the only effort they could muster.

Dundalk have no such problem issues on front of goal. As frustration increased, both on the pitch and in the stand, largely down to UCD’s resistance, they ensured the scoreboard reflected their superiority and there would be no slip-up.

Up to that point, they had become disjointed and unable to gain the measure of control they had assumed in the first period.

Towell and Kurtis Byrne both had sights of goal but O’Donnell kept them at bay.

He was left helpless by Hoban’s thunderbolt. There seemed little danger when the striker picked the ball up on the left wing but he drove infield, pushing aside the challenge of a couple of blue shirts, and before O’Donnell could position himself, he was beaten. 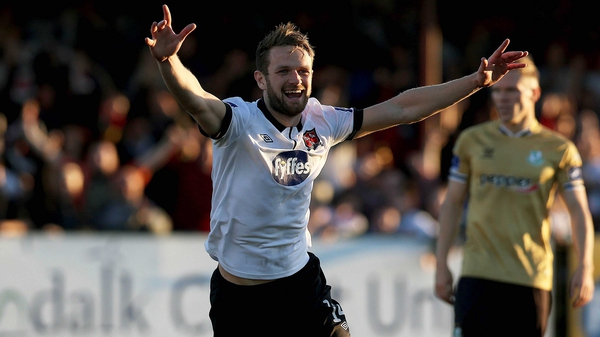