Republic of Ireland boss Martin O'Neill has played down Shay Given's chances of starting the opening Euro 2016 qualifier in Georgia on Sunday.

The 38-year-old, who retired from international football after the Euro 2012 finals, won his 126th senior cap in Wednesday night's 2-0 friendly victory over Oman after returning to the fold.

However, he will have to wait to see if O'Neill will retain him in Tbilisi at the weekend or stick with David Forde, who has been his first-choice goalkeeper to date.

O'Neill said: "He didn't have very much to do. Someone asked if he is guaranteed a place in the starting line-up - absolutely not.

"He did fine. He didn't have anything to do, but for the last couple of days, he has been excellent around the place. He has been very encouraging to the other goalkeepers and to everyone else.

"Actually, he has been very positive in terms of attitude. He's not expected anything and that's the way it will be."

Given, who was replaced by Rob Elliot at half-time, did not have a save of note to make as Ireland won without having to be anywhere near their best.

Goals from Kevin Doyle and Alex Pearce in either half were enough to secure the victory, although both David Meyler and Aiden McGeady hit the woodwork.

The challenge will be significantly stiffer in Georgia, where O'Neill will turn to his big guns once again after fielding an experimental side at the Aviva Stadium and collecting just the second win of his eight games in charge to date, a run which included clashes with World Cup-bound Italy, Costa Rica and Portugal.

He said: "If you want, every friendly game, let's play someone you think you can beat - I'm not in for that.

"We have changed the side around so many times now just more or less to see what players can do, all with the one thing in mind: to try to get as prepared as possible for Sunday."

Darron Gibson played 70 minutes on his return from a cruciate ligament injury which sidelined him for 10 months, but central midfield partner Stephen Quinn caught the eye with a quietly assured display.

O'Neill said: "Stephen has done fine. Apparently, he might have been looking at one stage maybe of leaving Hull, but he has fought back, fought back impressively to try to get a starting place in their team, and he is playing with a bit of confidence." 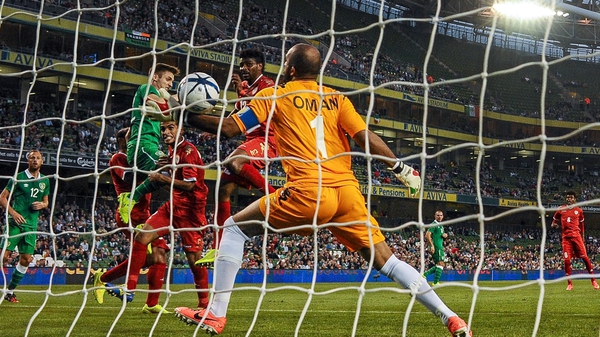 Ireland cruise to win over Oman