Ireland prepared for the start of their upcoming EURO 2016 qualifying campaign with a 2-0 victory over Oman at Aviva Stadium.

It was a far from inspiring performance from Martin O’Neill’s second string, as goals in either half settled the contest in front of a paltry crowd at the Lansdowne Road venue.

Kevin Doyle opened the scoring with a fine header from a corner with 20 minutes played, before Alex Pearce sealed the victory slotting home from ten yards in the 81st minute.

The arrival of Oman failed to capture the imagination of the Ireland supporters as the game kicked off and the opening exchanges didn’t even have the feel of a pre-season friendly.

Oman proved content to sit back in numbers as Ireland enjoyed virtually all the possession without really going anywhere. And it was the visitors who almost injected some life into the game with eight minutes on the clock as Raed Saleh set off on a mazy run deep into the Ireland half before Mohammed Al Siyabi’s effort flew just wide.

Ireland failed to take the warning shot seriously and laboured a while longer, summed up by Robbie Brady’s wayward pass to hand Oman a corner while under no pressure.

Wes Hoolahan was the only Ireland player looking to create in the opening 15 minutes but the wall of red jerseys were proving difficult to penetrate.

O’Neill’s side were always likely to work their way up through the gears and eventually got going in the 18th minute as Anthony Pilkington got in down the right flank to set Brady up for a shot from the edge of the box.

The Hull midfielder’s effort was blocked as the ball fell for fellow Tiger Stephen Quinn but the effort flew wide.

The Ireland work-rate increased, most notably with David Meyler taking any opportunity to make ground up the right flank and his efforts were rewarded as Ireland won a corner, which Brady, who may have moved closer to a starting spot against Georgia with the news of James McClean's withdrawal from the squad through injury, switched flanks to take. 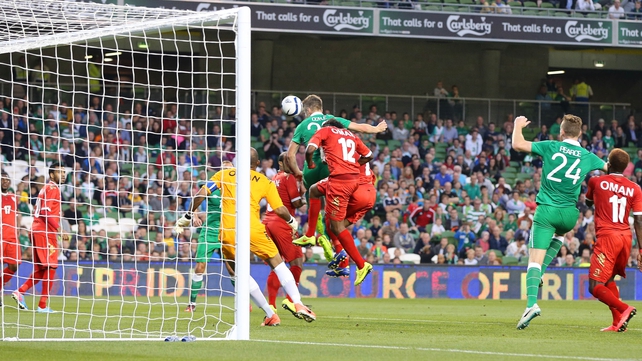 The delivery was delightful, as was the well-timed run, leap and header as Doyle’s effort flew past Wigan keeper Ali Al Habsi to give Ireland the lead.

Oman came out a little in the following minutes and a rare foray forward could have seen them nick a penalty as the ball appeared to strike Ireland centre-half Alex Pearce on the arm. It went unpunished.

A lot of the pre-match focus was on returning midfielder Darron Gibson and the Everton man began to influence the game with some clever passes lifted over the top and across the pitch, which will have caught the eye of the manager ahead of the qualifying campaign.

Another returning to the fold was veteran keeper Shay Given who proved a mere spectator in the opening third and was eventually called into action after 30 minutes as Oman countered to set Raed up with a chance in front of goal.

The shot was weak and Given remained untested.

The home side almost doubled the lead in the 32nd minute, again from a set-piece, as Pearce’s back-post header was cleared off the line by Hassan Al Ghailani, before Meyler again got forward to watch his clever effort come back off the post.

The half-time whistle would bring an end to Given’s evening as Newcastle’s Rob Elliot appeared for the second half.

Possession remained with the Irish as the second half progressed but again O’Neill’s side struggled to make inroads into the final third of the pitch.

In fact, the game only really got going following the triple-substitution of Robbie Keane, Shane Long and Aiden McGeady with half an hour to play.

The tempo increased immediately and seven minutes later, Oman were, once again, relying on a goal-line clearance to keep the deficit at one.

All three subs played their part with McGeady arriving in from the right to jink past the defender before watching his placed left-footed effort scrambled off the line by Mohammed Al Musalami.

Gibson departed after 70 minutes but not before picking up a yellow card for a reckless challenge on Eid Al Farsi. O’Neill will be pleased with what he saw from the former Manchester United man and maybe enjoyed that added aggression in a game that rarely ignited.

A brief spark returned in the final ten minutes and the game was settled, again from a corner kick, as Ireland doubled the lead.

This time, Brady’s delivery into the box was poor and had to be helped on by a retreating Richard Keogh, allowing the ball to drop to Pearce, who took one touch and tucked away a fine finish, this time beating the player on the line.

Late chances saw Keane fire wide before McGeady cut in from the left to clip a delightful effort onto the bar as O’Neill’s side registered a win for the first time since his opening fixture last November. 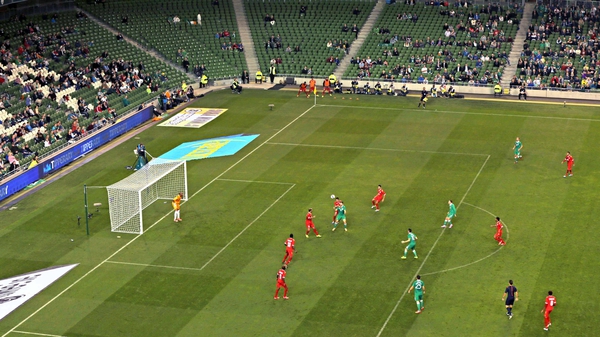 As it happened: Ireland 2-0 Oman