Sligo Rovers crashed out of the Europa League at the second round stage as they were beaten 3-1 (4-3 on aggregate) by Norwegian side Rosenborg at the Showgrounds.

The sell out crowd of 3,792 looked as if they were in for another historic night as early as the 13th minute when Danny North tapped home. But Kare Ingebrigsten's side levelled the game shortly after, courtesy of a Pal Andre Helland strike.

Rosenborg took the lead four minutes into the second period through Danish international Mike Jensen before Finnish striker Riku Riski sent the Norwegian side through with a well-finished effort in the 65th minute.

Rosenborg now progress to the third round to face Turkish side Kardemir Karabukspor.

Sligo went into the game holding a 2-1 lead over the Trondheim side from the first leg and looked to attack from the off.

The Airtricity League side almost found a fortuitous opener with less than two minutes played. Under pressure from the prowling North, Stefan Strandberg almost turned the ball into his own net with an attempted clearance which net-minder Alexander Hansen had to tip away.

Sligo tore into their Tippeligaen opponents from the off. Centre-half Evan McMillan found himself in space inside the Rosenborg penalty area on three minutes as he sprung the offside trap, but his attempted overhead kick flew harmlessly over the Rosenborg crossbar.

Rovers' early pressure paid off and John Coleman's side took the lead with 13 minutes played. Alan Keane's cross from the right was miss-hit by David Cawley before the ball inadvertently fell to the feet of North, who tapped home at the post for his third European goal of the year.

Rovers' lead didn't last long, however, as Rosenborg grabbed an equaliser three minutes later. Ross Gaynor failed to clear Mort Gamst Pedersen's ball to the back post before Helland hammered the ball beyond Gary Rogers with a ferociously struck volley to peg Sligo's aggregate lead back to 3-2.

Rosenborg took confidence from their away goal and looked significantly more dangerous on the attack. But they failed to make count any impetus they may have gained. Pedersen's free kick from 20 yards, which whistled past Rogers' far post in the 19th minute was the closest they came to taking the lead during the opening 20 minutes.

Rosenborg then lost goalscorer Helland midway through the half courtesy of a leg injury. He was replaced by the impressive American international Mikkel Diskerud, who was an unused sub in Jurgen Klinsmann's squad during the FIFA World Cup.

Diskerud was involved in the game's next chance in the 36th minute as Rosenborg enjoyed a sustained period of pressure. The midfielder did well to tee up Finnish international Riku Riski with a neat chested pass. Rogers spilled Riski's low drive but Kalen Spillane was on hand to clear the ball off the Sligo line.

Pedersen dragged his free kick from distance the wrong side of the Rovers post two minutes into the second half.

Another Gaynor mistake led to Rosenborg's second in the 50th minute. The Louth native again hesitated and failed to clear the ball as Tobias Mickelsen was allowed time to steal in and supply Diskerud who in turn knocked the ball towards Mike Jensen who effortlessly stroked the ball into the top corner. The tie was now standing at 3-3 at a very nervous Showgrounds.

North came agonisingly close to restoring Sligo's aggregate lead after 54 minutes. The Grimsby man ran on to John Russell's beautifully hit through ball before striking it with the outside of his right foot, only to see his effort bend around the wrong side of the post.

The Norwegian side captured the aggregate lead just over ten minutes lates. Riski's initial shot was blocked by a Sligo defender before the ball fell to Diskerud whose effort was also diverted. Unfortunately for Rovers, possession then fell to Riski who lashed the ball past Rogers to hand his side a 3-1 lead on the night and a 4-3 aggregate advantage.

Sligo had to rely on another goal-line clearance in the 67th minute as North got his body in the way of Diseruid's effort from inside the area.

With Rovers now requiring two goals, Coleman shuffled his pack in an effort to level the tie: striking duo Ruairi Keating and Sean Maguire were introduced with 20 minutes to play.

The home side had a claim for a penalty turned down with 15 minutes remaining after Diskerud looked as if he had bundled over Seamus Conneely inside the Rosenborg area. Belgian referee Erik Lambrechts quickly waving away the Showgrounds side's claims however.

With a minute to play, Rovers almost grabbed the goal that would have levelled the tie on the night. North did well to get on to the end of Russell's through ball before finding the head of Evan McMillan who beat his marker to the ball but couldn't keep his header below Hansen's crossbar. 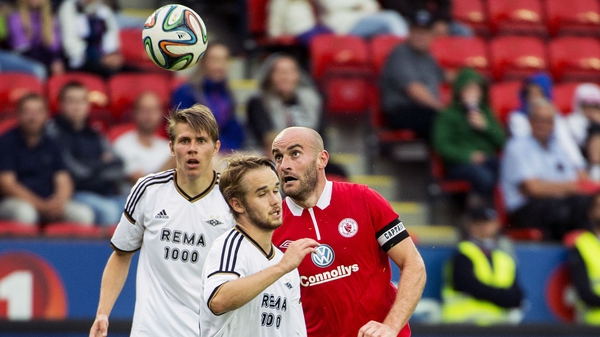