Sligo Rovers recorded a magnificent 2-1 win over Norwegian giants Rosenborg in the first leg of their Europa League second qualifying round encounter at the Lerkendal Stadion.

Rosenborg registered what could prove an important goal of their own ten minutes from time, courtesy of an unfortunate David Cawley own goal.

The Bit O' Red enjoyed a lively start and were responsible for the game's first chance with less than a minute played.

North's quick thinking resulted in his pass finding Cawley, but the midfielder was denied by a Tore Reginiussen block inside the area.

Rosenborg's Alexander Soderlund then shot wide on 11 minutes after he was played through by Mikael Dorsin.

Hearts were in Sligo mouths on the quarter-hour mark when Ross Gaynor conceded possession 30 yards out, but Pal Andre Helland failed to hit the target when afforded plenty of time and space.

Rogers saved well from Halland on 22 minutes, five minutes before the Rovers netminder denied Mike Jensen with an excellent save low down to his right.

Sligo did well to soak up any pressure from the Tippeligaen side, while John Russell sent his low drive wide of Alexander Hansen's left-hand post in the 25th minute following a speedy counter-attack down their right.

The Norwegian side had claims for a penalty turned down on the half-hour mark when Gaynor upended Halland inside the box, but claims fell on deaf ears as the Danish official waved play on.

Rosenborg fired a warning shot shortly before half-time as Mikkelsen blasted narrowly over to leave it scoreless at the break.

Five minutes after the re-start, the industrious Helland could only bend his left-footed shot wide of the Sligo goal.

And the Showgrounds side then grabbed a deserved lead in the 54th minute.

Keane's initial shot was blocked away by Hansen but possession returned to the Sligo captain at the edge of the area.  The Galway man neatly flicked the ball over his marker and unleashed a low drive which took a deflection off a Rosenborg defender and rolled into the net.

Rogers then pulled off another superb save on the hour mark as he diverted Helland's downward header away for a corner, with the Rosenborg player seeming certain to score.

Evan McMillan cleared Pedersen's dipping header off the line in the 64th minute as the Norwegians piled on the pressure.

Incredibly though, Sligo doubled their lead in the 70th minute. Cawley's searching ball to the back post was tapped in by the lurking Danny North, who was rewarded for his powerful run.

Rogers then had to be alert to Helland's deflected effort in the 75th minute, with the Meath man doing well to get his body behind the shot after it took a deft touch off Gaynor. North then went close with a speculative effort from a tight angle.

However, the home side grabbed a reply in the 80th minute. Former Blackburn Rovers star Mort Gamst Pedersen's saw his corner punched away by Rogers, but the keeper could only inadvertently play the ball against the back of the unfortunate Cawley and into the net.

Sligo almost restored their two-goal advantage in the 87th minute when substitute Ruiari Keating robbed Mikkelsen, but his shot was blocked by Hansen. The rebound fell to Paul O'Conor but his effort was cleared off the line by Ole Selnaes.

However, Sligo will be more than content heading back to the Showgrounds with this massive result against a side who regularly appear in group stages of European competition. 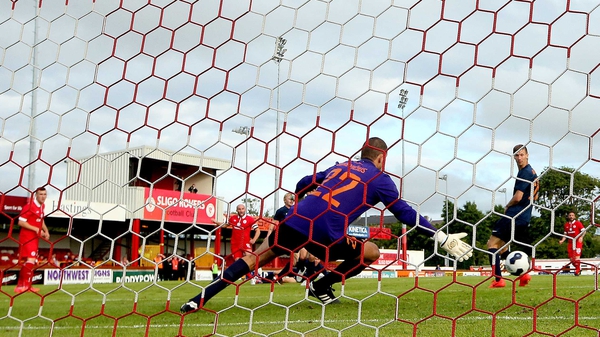