Athlone Town are within one good result of getting off the bottom of the table after they picked up a 3-0 home victory against Limerick tonight, achieved very much against the run of play.

Derek Prendergast, Kealan Dillon and Philip Gorman all hit the net for the home side in the first half but Limerick had at least as many chances and will wonder how they failed to take advantage of their huge share of possession.

Prince Agyemang and Tam McManus both came close for the visitors in the second half but the life drained out of their challenge in the closing fifteen minutes and they needed Shane Cusack to produce a few excellent saves late on to deny Athlone further goals.

Athlone came into this tie on the back of a very creditable 0-0 draw with Dundee United during the week and they certainly carried plenty of positivity and self-belief from that tie into the opening half, qualities that were crucial to their efforts in repelling strong Limerick pressure throughout the opening 45 minutes.

They burst out of the blocks with a straightforward set-piece goal after just four minutes of play, Prendergast heading the ball towards the goal after Dillon’s corner found the big defender at the far post.

Limerick came roaring back into the tie and their more condensed midfield unit took control of the ball and set up a string of excellent chances inside the next quarter of an hour.

Ian Turner had two long-range efforts on goal, one that bounced narrowly wide and another that was hit too close to Paul Skinner, then he turned provider when he placed a free-kick right onto the head of Robbie Williams.

The Yorkshireman didn’t quite get enough on the header and only glanced it straight at the Athlone custodian when any solid contact would have resulted in a certain goal.

Even when Rory Gaffney beat Skinner with some good footwork and a low shot, Derek Prendergast was on hand to clear the ball off the line.

Limerick were then dealt a further blow when Kealan Dillon doubled Athlone’s lead in the 20th minute, taking advantage of the home side’s second meaningful foray into the Limerick area.

Seán Byrne’s cross from a deep angle dropped perfectly in between the Limerick centre-backs and the Athlone midfielder timed his run perfectly to meet the delivery.

Limerick racked up a string of corner kicks and continued to play much of their football in the Athlone half, but Prendergast and Alan Byrne were in outstanding form at the heart of the Town defence and they kept the visitors at bay.

Once again Athlone came into the game shortly before half time and again they got rewarded for their efforts, Philip Gorman tapping the ball in after Shane Cusack failed to hold Stephen Quigley’s cross.

Rarely has a half-time score been more misleading than in this instance, but arguably the hosts did enough in the second half to prove they were worthy of the three points.

They held Limerick at bay for most of the period, only looking like conceding a goal with 20 minutes to play when Rory Gaffney cut them open with some good footwork.

The Tuam native did really well to evade two Athlone tackles and square a low ball along the six-yard line into the path of Tam McManus, but again the Town’s goal was kept intact as substitute keeper Ryan Coulter, arguably the man of the match against Dundee United, positioned himself well and cleared the ball with his feet.

As Limerick’s heads dropped in the aftermath of this miss, Athlone poured forward in the closing stages and finally enjoyed a period of real dominance, though they failed to add to their tally thanks to several fine saves from Cusack.

Kealan Dillon, James O’Brien and Mark Hughes all drew fine saves from the Limerick keeper, though at that stage the visitors knew that they were going home empty handed. 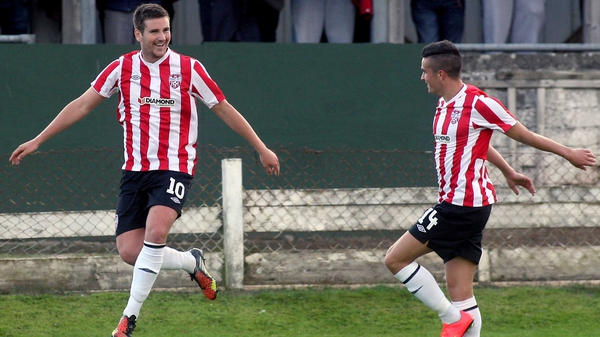