A stunning thirty yard free kick from Patrick McEleney in the 20th minute of this Airtricity League clash at Lissywoollen was enough to give Derry City a 1-0 away victory over Athlone Town and push the visitors back up into the top half of the table.

McEleney’s wonderful drive into the top corner of the net was the highlight of an end-to-end first half in which Athlone had their fair share of chances, the pick of which fell to striker Philip Gorman.

Athlone continued to press in the second half but despite a real lack of energy from the visitors, they failed to make their possession and territory count on the scoreboard and eventually ran out of time.

Eventually time ran out on the hosts, who passed up a huge opportunity to eat into the six-point gap between themselves and UCD at the bottom of the table.

Both sides had great opportunities to score inside the first five minutes, Gorman narrowly failing to get a touch on Seán Byrne’s low cross at one end before new Derry recruit Philip Lowry pulled a shot wide of the target when striking on the turn on the edge of the Town six-yard box.

Good play from the central-defensive partnerships at either end of the field ensured that the two goalkeepers were protected up until the 20th minute, when Skinner could do nothing about McEleney’s long-range thunderbolt.

A rash tackle by Derek Prendergast on Rory Patterson handed the Candystripes the opportunity, but Athlone also underestimated their opposition by only putting one man in the wall, a decision that McEleney punished in style with a powerful strike into the top left-hand corner of the net.

Gorman’s second scoring opportunity followed seven minutes later when Danny Ventre under-hit a back pass and left Gorman with a clear sight on goal, but Shane McEleney came to the rescue of Ventre with a vital last-ditch tackle to block Gorman’s effort and force the ball out for a corner.

It just wasn’t a good day for the Athlone top scorer as his next opportunity, a close-range header, crashed against the Derry City goalpost.

Athlone’s form had been vastly improved since new manager Keith Long took the helm at the end of April.

They looked well worth an equaliser throughout the second half, but failed to take full advantage of a Derry side that were visibly tiring just three days after their successful Europa League outing against Aberstwyth at the Brandywell.

Seán Brennan drew a wonderful save from Ger Doherty with a 25- yard drive that looked to be dipping under the crossbar, but with half an hour still to play, Athlone had plenty of time to produce an equaliser and looked good value to do so.

Despite enjoying plenty of possession in that last thirty minutes, however, the breakthrough never came. 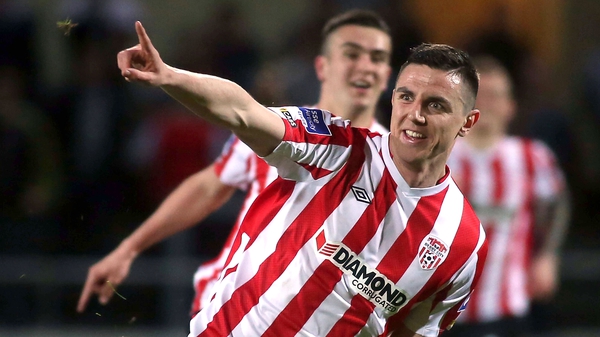