Derry City were made to work for their 3-2 win over bottom side Athlone Town in the SSE Airtricity League Premier Division encounter at the Brandywell.

The bottom side in the end probably deserved at least a share of the spoils, but the win for Roddy Collins’ men was much-needed.

City should have taken the lead on 11 minutes but Rory Patterson’s close-range shot went the wrong side of the post after Enda Curran had caught out Town keeper Craig Sexton.

The deadlock was broken four minutes later in super fashion when a teasing Kealon Dillon cross from the right found an unmarked James O’Brien who made no mistake guiding the ball home from just inside the box.

It didn’t take the home side long to level things in somewhat fortunate circumstances when Michael Duffy’s cross found Curran and his tame header from close range caught out Sexton and somehow ended up in the net.

A tremendous pass by Patrick McEleney then set-up Patterson and the last season’s top scorer finally opened his account when he made no mistake from close range after rounding Sexton.

Minutes later Doherty came to his side’s rescue when Graham Rusk broke in behind the City defence, but his low shot from the left hand side of the box was kept out by the Derry net-minder’s legs.

On 50 minutes a Dillon cross from the left found Gorman in the six yard box, but the front man’s glancing header was easily gathered by Doherty.

The home side increased their lead on 61 minutes in super style as Curran’s pass found Duffy inside the box and he created himself some space on the left hand side before drilling the ball home past Sexton.

Within a minute Town had a great opportunity to pull one back but Sean Byrne incredibly failed to trouble Doherty, as they blasted well over the bar when it looked easier to score.

Athlone didn’t let their heads drop and they scored a second on 75 minutes in super style when with virtually his first touch Jason Marks’ free-kick 25 yards from goal gave Doherty no chance and fizzed into the net.

On 88 minutes a stunning run by Patrick McEleney ended with his long range shot flying past Sexton, but the post denied him. 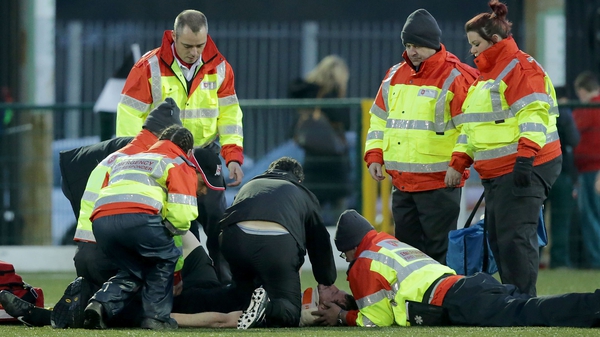