Athlone Town remain adrift at the bottom of the SSE Airtricity League Premier Division table but their supporters will start to believe that a great escape is possible after they crushed Drogheda United 6-0 in Lissywoollen.

Goals from Philip Gorman and Derek Prendergast shortly before half-time gave the home side a comfortable interval lead and the victory was all but assured ten minutes after the restart when James O’Brien sprung the offside trap and coolly beat Dylan Connolly in a one-on-one situation.

Gorman, Seán Brennan and Ian Sweeney added to Drogheda’s misery in the last quarter hour and in the process increased the pressure on beleaguered manager Robbie Horgan, who was the subject of a barrage of comments from visiting supporters when the final whistle sounded on their fifth defeat in succession..

United have now conceded an incredible 25 goals during that dismal run of form, but goals did not seem likely in this tie after the first half hour of action, a spell during which the two sides played very cautious, error-ridden football with very few clear sights on goal.

A heavy fall of rain mid-way through made control of the football extremely difficult and both teams were unable to do any better than long range speculative efforts.

Gary O’Neill sent a 25 yard-effort sailing over the crossbar for Drogheda while Mark Hughes did well to keep a half-volley from just outside the area low, and he drew a fine full length save from Dylan Connolly.

In the 40th minute the deadlock was finally broken and it was top scorer Gorman who made the breakthrough for the home side, taking in a knock-down from Derek Doyle and crashing the ball home from eight yards out on the turn.

Two ex-Drogheda United players combined to double that lead just three minutes later, Prendergast getting the decisive touch on a Seán Brennan cross from out on the right wing.

Both sides came out after the interval with a spring in their step and Drogheda looked in the early stages as if they would give Athlone plenty of cause for concern, coming closest to scoring when O’Neill played in Declan O’Brien with a low ball, forcing Paul Skinner to advance off his line smartly and make a crucial save.

Any hopes United had of a comeback were all but extinguished in the 55th minute however, as Hughes slipped in O’Brien with an exquisitely-weighted delivery along the deck.

While the Drogheda back four were screaming for an offside flag, O’Brien was calmly placing the ball under Connolly and into the net to make it three-nil.

Drogheda continued to press hard and both Paul Crowley and O’Connor had chances cleared off the line by Athlone around the hour mark, but their self-belief started to waver in the closing stages and when a moment of defensive hesitation allowed Gorman to sneak in, intercept a back-pass and successfully round the keeper with 18 minutes to play, they had the demeanour of a side that simply didn’t believe any effort would be rewarded.

Brennan added the fifth goal with a deflected free kick in the last minute of normal time, a strike that he would have enjoyed on account of the attention he had received from the Drogheda supporters throughout the game, and Sweeney completed the rout in injury time with a neat finish from a tight angle, having been played in by Brennan. 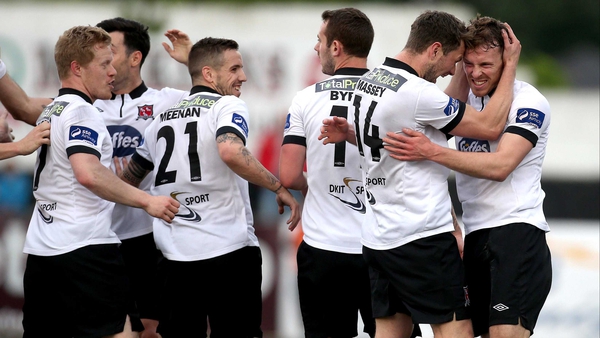