Sligo Rovers’ defence of their FAI Ford Cup title is over after Dundalk inflicted a resounding 3-0 defeat on the Bit o' Red at Oriel Park.

Dundalk striker David McMillan played an integral part in his side’s seventh win on the bounce, scoring the opening goal and creating the other two as Stephen Kenny's men booked their place in the last 16 of a competition they haven’t won since 2002.

When Sligo Rovers beat Dundalk in the Setanta Cup final at Tallaght Stadium last month there couldn't have been too many people who thought Rovers’ season would effectively be over less than four weeks later.

Ian Baraclough’s charge now find themselves 17 points adrift in the league and out of all the domestic competitions. The Europa League is all that Sligo have left to play for now.

Things may have been different had they opened the scoring just short of the quarter-hour mark. Eric Odhiambo swept the ball out to the right for Danny North and raced into the area to collect the return. The Rovers striker bore down on Peter Cherrie, but his effort lacked direction, drifting wide of the target. It proved to be a rare excursion into the Dundalk penalty area.

It was mostly one-way traffic for the remainder of the half.

David McMillan, given a rare start due to Patrick Hoban's knee operation, forced Gary Rogers into a good save in the 16th minute and Dane Massey then saw a free header tipped away by the Sligo Rovers goalkeeper.

Dundalk's momentum grew by the minute and the pressure eventually told just past the half-hour mark.

Brian Gartland's pass from the back found Richie Towell on the left. His delivery into McMillan's feet was top class but the striker's finish was even better. Losing his brother, Sligo centre-back Evan, he created space and shot into the top corner from 12 yards.

The second goal was always going to be crucial in determining the outcome and it arrived less than two minutes after the restart.

Again, it was the result of another incisive bit of football. Towell picked McMillan out on the inside right and his lay-off was swept home emphatically by Daryl Horgan.

With their dreams of Aviva Stadium on life support, Sligo needed an instant pick-me-up, and they almost got it three minutes later. Danny Ledwith's free-kick was met by the head of North but Cherrie got down to tip the ball wide.

It proved to be a rare bit of action for the Dundalk goalkeeper, and the home side secured their passage to the last 16 when centre-back Brian Gartland made it 3-0 with a thumbing finish after Rogers had denied McMillan a second.

Elsewhere, Cork City showed minnows St Mochta’s no mercy at Turner’s Cross. Mark O’Sullivan opened the scoring for the home side after just four minutes, with Billy Dennehy (two), Robert Lehane, Danny Morrissey and Ian Turner all getting on the scoresheet in a 6-0 drubbing of the Dublin side. 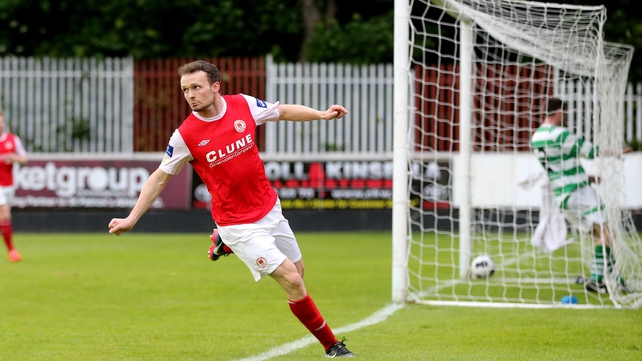 St Patrick’s Athletic were another top-flight side to coast to victory against non-league opposition, with Liam Buckley’s men recording a 3-0 win against St Patrick's CYFC in a Dublin derby.

Conan Byrne opened the scoring at Richmond Park in the 43rd minute, with Republic of Ireland international Keith Fahey adding a second with a sublime strike from the edge of the box in the 53rd minute. Daryl Kavanagh completed the scoring with three minutes of normal time remaining.

Craig Shortt scored the only goal of the game at Ferrycarrig Park as First Division side Wexford Youths upset Bray Wanderers 1-0.

Longford saw off Athlone Town 2-0 in a midlands derby, with David O’Sullivan and Mark Salmon doing the damage for Tony Cousins’ side in a two-minute spell in the second half.

Jason Molloy, Stephen Walsh and Jake Keeegan were on target for Galway as the Students were taught a painful lesson at the UCD Bowl.

Shelbourne edged First Division rivals Waterford United 1-0 at Tolka Park and Finn Harps laboured to a 1-0 win over Belgrove in the night’s other second round games.