Gonzalez was sent off for elbowing striker Doyle and causing a head wound which needed five stitches in the Republic's 1-1 draw with the World Cup-bound Central Americans in Philadelphia during the early hours of Saturday morning.

His actions were swiftly condemned by manager Jorge Luis Pinto, but Keogh admitted he was astonished by the incident, which happened as the two men fought out an increasingly physical battle.

The 27-year-old Derby man said: "We knew it was going to be a tough game, but I suppose in a friendly, you are not expecting someone to elbow someone in the head.

"You wouldn't expect that in any game, let alone a friendly game. He's got stitches in there now, Doyler.

"It was stupid, he deserved to be sent off. You don't want to see that on a football pitch. I hope he learns from it because he has let his team-mates down and let his country down.

"It was a poor challenge. If you look back at it, even their players were apologising for it.

"It was stupid, very stupid. I don't know what went through his head, but he deserved the red card."

"It was a poor challenge. If you look back at it, even their players were apologising for it" - Richard Keogh

Skipper Robbie Keane did not get a good view of the incident, but its after-effects told him all he needed to know.

"I saw the two guys going up, but I didn't really see it very, very clearly,” Keane said.

"But it's clear to see from his [Doyle's] injury - he's in there now getting stitches - so it certainly was a bad injury."

Martin O'Neill's men will complete their season with another tough assignment against Portugal in New Jersey during the early hours of Wednesday morning, but Keane insists that is just the kind of challenge they need to hone themselves for the start of the Euro 2016 qualifying campaign in September.

"It's important that we play good teams and certainly teams who keep the ball and have good possession because come September and playing in the qualifiers, we are going to be playing against teams that are very, very good on the ball,” he said.

"At times, we are going to have to be sitting back for 10, 15 minutes and trying to soak the pressure up." 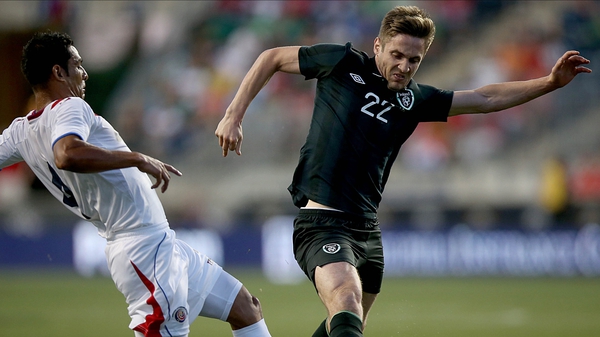