Kevin Doyle scored on his first start under Martin O'Neill and Robbie Keane missed a penalty as Ireland drew 1-1 with Costa Rica in a tumultuous international friendly.

Costa Rica’s Giancarlo Gonzalez's World Cup dream could be over after he was sent off after an ugly altercation with Doyle, who was left with blood pouring down his face, four minutes before the break at PPL Park in Philadelphia.

Gonzalez now faces an anxious wait to discover his fate with Costa Rica due to launch their campaign against Uruguay on 14 June.

It proved to be an eventful evening as Doyle, who handed Ireland an early lead with his 13th international goal before Gonzalez lost his head, only for Celso Borges to level from the penalty spot after the break. 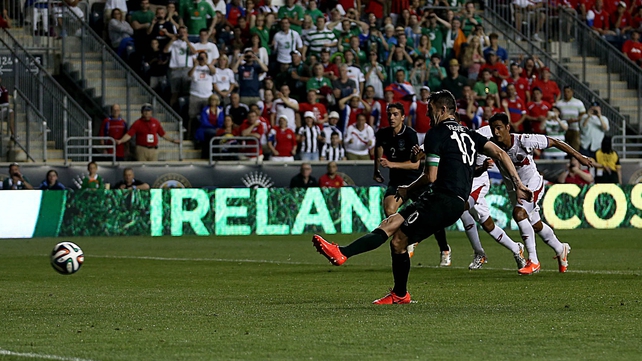 O'Neill promised to use the depth of his squad, and was as good as his word as he made nine changes to the side which drew 0-0 with Italy at Craven Cottage on Saturday evening.

One of those moves was to reintroduce Keane after a four-game absence, but there was also a senior debut for Everton defender Shane Duffy a little more than four years after he almost died on the training pitch after lacerating his liver in a freak accident.

It was the more established Doyle who proved the central character in more ways than one.

Ireland might have got off to an ideal start when Keane ran on to Doyle's pass and shot instantly from 40 yards, almost catching goalkeeper Keylor Navas flat-footed.

Costa Rica played the more progressive football early on and it took a brave block by midfielder Paul Green to repel Jose Miguel Cubero's well-struck shot after he had been set up by a clever back-heeled pass from Ruiz.

However, they were having trouble dealing with Doyle's physicality, and Oscar Duarte had to clear the striker's 17th-minute cross after he had muscled his way past defender Michael Umana.

But the danger was far from over and when Marc Wilson played the ball back into the penalty area, Doyle powered a header from 17 yards beyond a despairing dive from Navas.

Ireland grew in confidence in the aftermath of the goal as Costa Rica lost their composure, although goalkeeper David Forde was relieved to see Borges shoot over after he had flapped at Heiner Mora's cross.

But Gonzalez, who had been fighting a running battle with Doyle throughout, allowed his frustration to get the better of him when he lashed out at the frontman, leaving him bleeding from a head wound.

Referee Raul Castro produced a yellow and then a red card amid a melee as players from both sides reacted angrily, but the defender had little choice but to head for the dressing room as Doyle was patched up on the pitch.

Costa Rica might have levelled in first half injury time when Duarte got his head to Borges' free-kick beyond the far post, but he could not hit the target.

Ireland had a chance to increase their advantage within five minutes of the restart when Keane played midfielder Stephen Quinn into space on the left side of the penalty area, but he scuffed his cross and it was intercepted before Doyle could pounce.

Costa Rica responded with striker Marco Urena blazing high and wide after appearing to get away with a tug on Richard Keogh's shirt, and then being denied by the same defender's sliding block.

Campbell took up the challenge with 53 minutes gone, cutting inside makeshift left-back James McClean - he had replaced the injured Wilson before the break - and testing Forde at his near post.

Central defenders Keogh and Duffy found themselves under intense pressure as Campbell went through his full repertoire, and the Republic finally succumbed with 64 minutes gone.

Urena ran on to Campbell's reverse pass and went down under Forde's challenge, prompting referee Castro to point to the spot, and Borges duly obliged to level. 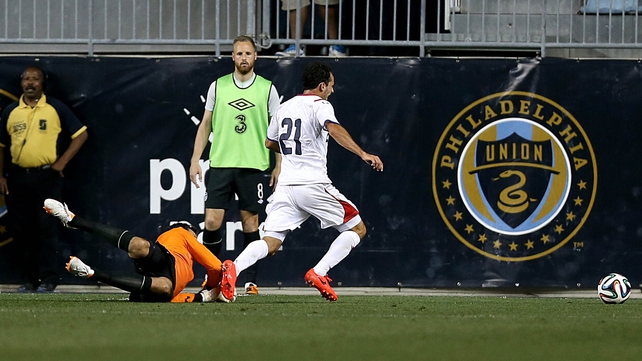 However, Ireland could have restored their lead within two minutes when the official awarded a second spot-kick, this time at the other end, after ruling that Quinn had been felled by Mora.

Keane stepped up ready to claim his 63rd goal for Ireland, but saw Pemberton dive to his right to palm the ball away.

As play switched rapidly from end to end, Campbell forced a diving save from Forde, but Pemberton had to pull off fine saves to deny substitutes Shane Long and Simon Cox as time ran down. 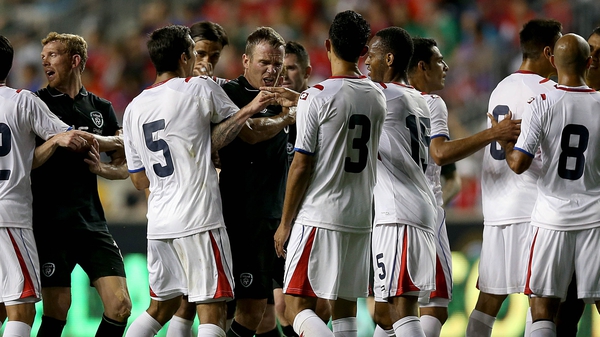