Hull midfielder David Meyler insists the news that Arsenal are already planning their victory parade has gifted the Tigers an extra incentive to win the FA Cup for the first time in their history on Saturday.

Traffic notices in north London make clear the Gunners are expecting to show off the trophy in an open-top bus tour around Islington the day after the final on Sunday.

But Meyler is adamant the Tigers will revel in their role as underdogs - and could not resist a stark reminder to Arsene Wenger's men over their distinct lack of opportunities for victory parades in recent seasons.

Meyler said: "Nobody expects us to win it and obviously they haven't won a trophy in nine years and they've got their posters up in London about their parade next week and credit to them.

"I'd rather be the underdog. People are delighted when the underdog wins - I don't think many people want Arsenal to win.

"But being the underdog isn't the worst thing in the world and we've just got to use it to our advantage. Nobody expected Wigan to win it last year but they made it difficult for Manchester City the whole game and they deserved to win it.

"It gives great hope for all of us, and you can also look at Sunderland and the teams they beat in the League Cup. It just shows it is 11 against 11 and if you want it more than the fellows you are up against then you can win."

Republic of Ireland international Meyler is expected to be one of the first names on boss Steve Bruce's team-sheet after a stellar season which helped him shrug off the memory of two career-threatening cruciate ligament injuries.

But the 24-year-old still had an anxious wait earlier this month before the Football Association ruled out retrospective action over an alleged stamp on Adnan Januzaj in the Tigers' 3-1 defeat at Manchester United.

Meyer's challenge incurred the wrath of Ryan Giggs but Meyler said: "It was an accident because my right foot is in the air. It's clumsy and slow and sloppy because I'm tired and Januzaj is too quick for me and he moves his leg too fast - but there's nothing in it and that's why nothing came of it."

Meyler expects to be cheered by a sizeable contingent of friends and family who will fly over from his native Cork to support him on what he concedes will be comfortably the biggest day of his football career.

And despite many indications over the eroding importance of the competition in the domestic football calendar, the FA Cup has retained special place in Meyler's heart since boyhood days watching the likes of Eric Cantona fire Manchester United to victory over Liverpool in 1996.

Meyler added: "It always was a massive competition and I think it still is.

"I still remember the first game I played in the FA Cup for Sunderland. I've got fond memories of the competition and my first memory is probably Cantona scoring the winner against Liverpool." 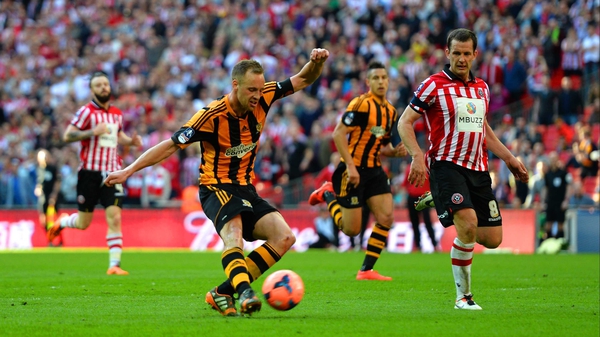