The 33-year-old central defender led the Black Cats to safety as they staged an unlikely fightback to drag themselves out of deep trouble and preserve their place in the Premier League at the end of the last campaign.

A serial winner during his time at Manchester United - he has five league titles to his name - O'Shea admits clinching survival felt almost as good at earning some of the honours he has claimed during his career to date.

"You don't get any medals from climbing away from the foot of the table, but I was asked how the feeling we have at the moment compares with collecting a winners' medal,” O'Shea told the club's official website.

"Undoubtedly the elation we are all experiencing has got to be up there.

"The achievement is all the more satisfying because of the teams we have had to face in recent weeks and the pressure we were under when we were written off.”

However, no sooner had safety been achieved than he was already turning his attention to preventing the need for a repeat of the late surge to safety.

"We have stood up to it and, after last season, we are already thinking about making sure that next year, we start off much better so we don't find ourselves in the situation we have just come through," he said

Sunderland would have been playing Championship football next season had they not managed to summon up remarkable reserves to claim seven points from a possible nine in the most unlikely of circumstances from trips to Manchester City, Chelsea and Manchester United as the campaign reached crunch point.

They eventually ensured their continued presence in the Premier League with a 2-0 home win over West Brom with a game to spare, and ended the campaign in 14th place, something which had looked way beyond them just a few weeks earlier.

Head coach Gus Poyet found himself up against it from the off with the club having collected just a single point from their first seven games when he replaced Paolo Di Canio in October last year, and O'Shea paid tribute to the work done by the Uruguayan and his staff.

"We took only one point from the first seven games so right from the moment the gaffer came in we have been chasing teams,” he said.

"But it's to the credit of the head coach and his staff that they have stuck to their guns in terms of how they wanted us to play.

"They have got their ideas across about how they want to see us create chances, and so credit is due to them as well as to the players, who have worked hard to put these ideas into practice." 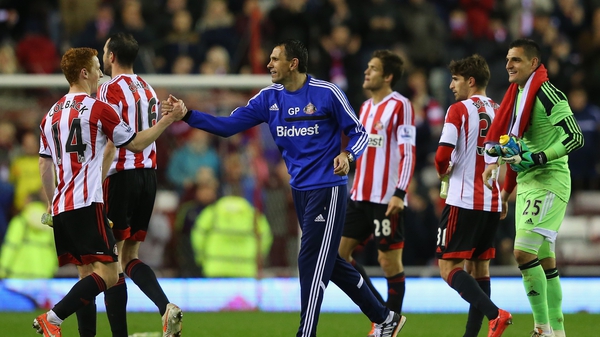 Gus Poyet: Sunderland must learn lessons for next season