Gus Poyet guided Sunderland to Barclays Premier League safety and immediately turned his attention to ensuring they do not face the same battle next season.

The Black Cats became just the second club to lie at the foot of the table at Christmas to survive by virtue of a 2-0 victory over the other, West Brom, at the Stadium of Light.

It was their fourth successive win, something they had not achieved in the top flight since December 2000, and gave them a total of 13 points from the last 15 they have contested.

However, head coach Poyet, who celebrated deliriously with his players on the pitch after the final whistle, is adamant that the lessons of a remarkable campaign must be learnt.

"I want to have a season where I can relax and see my team playing football week in, week out.

"Are you going to win the league? No, but we need to make sure we don't go another season like the last two or three because when you play with fire, in the end, you get burnt and we don't want to do that.

"We don't want to go down, so we need to make sure that we don't make the same mistakes that we have been making for the last two or three years."

Victory lifted Sunderland to 14th place, five points clear of Norwich, who need to beat Arsenal on Sunday and see the Baggies lose at home to Stoke with a swing in goal difference of 17 to avoid the drop.

They got their noses in front when Jack Colback turned home Marcos Alonso's 13th-minute cross, and they were coasting when Fabio Borini volleyed home from Sebastian Larsson's delicate pass.

West Brom responded after the break, but the Black Cats could have extended their lead but for a glaring 65th-minute miss by substitute Jozy Altidore, and the points were safe long before the final whistle.

Poyet had admitted just a few short weeks ago that his team needed a miracle to stay up, and insisted survival was the biggest achievement of his life.

"I am absolutely delighted, I am proud of what we have achieved,” he said. “I am so pleased for the players, the fans, the club, really.

"I was brought to the club to do one job and one job only, and it was to stay in the Barclays Premier League, and we have done it in a certain style, I can say.

"It's going to be remembered forever. There are going to be people talking in many, many years' time - 'Sunderland did it, it's possible, we can do it'.

"We need to make sure we don't go another season like the last two or three because when you play with fire, in the end, you get burnt"

"I can see plenty of managers telling their players in the future, even if you are seven points adrift with six games to go, you can do it."

West Brom replaced Sunderland in 17th place, although their superior goal difference means they are effectively safe even if Norwich do manage to get the better of the Gunners.

However, boss Pepe Mel was less than impressed by a lacklustre first-half display which sends them into Sunday's home clash with Stoke with his future still uncertain.

Asked about his hopes of extending his stay at the Hawthorns after arriving on an 18-month deal, he said: "I really don't know. That's not a decision for me to take, I'm not sure.

"What we need to try to do is try to change the image that we are giving of the team against Stoke City.

"I am very disappointed with the first half. I don't understand what happened in that first half. We weren't able to equal Sunderland's intensity." 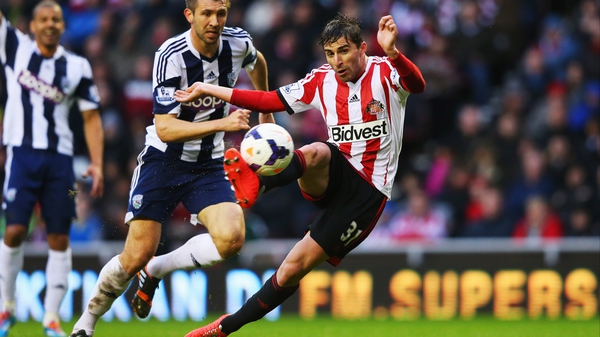