Arsenal coasted to a 1-0 win over West Brom in their final Barclays Premier League home match of the season at the Emirates Stadium.

Following Everton's defeat by Manchester City on Saturday, the Gunners were already secure of fourth spot, and with it a chance of qualifying for the Champions League group stages once again next season.

Olivier Giroud headed in his 22nd goal of the campaign in all competitions after 14 minutes, which proved enough to see off West Brom, who are all but secure of their top-flight status with two matches left still to play.

Arsenal made just one change from the XI which had beaten Newcastle here on Monday night, as Mathieu Flamini came in for Aaron Ramsey, who was rested because of a minor thigh problem;  one which is not expected to keep the Wales midfielder out of contention for the FA Cup final.

It was a bright start by Arsenal in the May sunshine, with Lukas Podolski driving just wide and then Santi Carzola's blocked effort flying over.

From the resulting corner, Arsenal took the lead.

Giroud showed great strength to hold off Craig Dawson, who was man-handling the France forward, and powered a header in at the near post for a 16th Premier League goal. 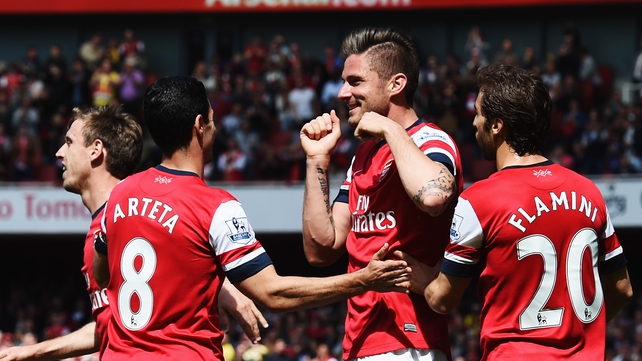 West Brom, four points clear of trouble before kick-off, looked to rally, but with only Saido Berahino at the head of a five-man midfield, they offered little penetration in the final third.

James Morrison floated a long-range effort over the bar as he looked to catch Arsenal goalkeeper Wojciech Szczesny off his line.

Arsenal were soon back on the offensive, with Flamini sending over a low cross which was kicked away by Baggies keeper Ben Foster.

On 31 minutes, Szczesny had his hands stung by a rasping 25-yard drive from Graham Dorrans, which the Poland keeper beat down and Berahino hooked the loose ball over the crossbar, but had been flagged offside.

Arsenal then almost made it 2-0 on the break when Podolski got away down the left and his low centre was flicked towards the bottom left corner by Cazorla, but Foster got down to make a superb reaction save.

The second half tempo showed little sign of a dramatic improvement, with West Brom aware bar an unlikely away win for Norwich at Chelsea later, then they would have no genuine concerns with two matches still to edge on from 36 points.

Gunners boss Arsene Wenger insisted his side would not drop focus ahead of the FA Cup final against Hull in a fortnight's time and they at least did show some purpose as the hour approached, with Giroud in determined mood chasing down the visitors backline.

The France forward was only inches away from connecting with a lovely curling cross from the left by Mesut Ozil, growing into his role following a return to fitness from a hamstring tear.

With 25 minutes left, Mikel Arteta was replaced by Kim Kallstrom, the Sweden international signed on loan from Spartak Moscow in January.

Tomas Rosicky then soon came on for Cazorla to try to inject some fresh pace into Arsenal's forward play.

Szczesny blocked a determined run from Morgan Amalfitano into the Arsenal box as the Baggies upped their quest for an equaliser.

Ozil scuffed his shot after collecting a knockdown from Giroud into the right side of the penalty area.

Podolski then - with the whole goal to aim at just six yards out - missed his kick and clipped the ball against the woodwork, before it dropped to a grateful Foster.

But for a couple of corners for West Brom, that proved to be the last meaningful action of a game which was for large spells played at a pedestrian pace, the hard work for both sides already done. 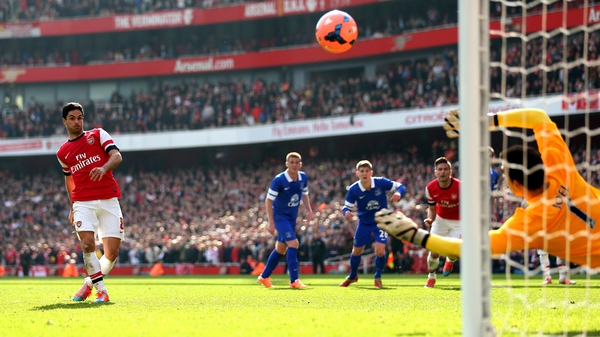