Fulham remain in the Barclays Premier League bottom three after they threw away a two-goal lead to draw 2-2 at home to Hull.

Felix Magath's half-time substitutions had looked like inspiring the Whites to the win they needed to lift themselves out of the relegation zone for the first time since January as both Ashkan Dejagah and Kieran Richardson played a part in their two goals.

With fellow relegation candidates Norwich and Cardiff playing later in the weekend, it was a golden opportunity spurned by Magath's side to pick up a fourth win in seven and drop the Canaries into the bottom three.

The game did not spring into life until after the interval as Magath responded to an insipid first-half display by bringing on Dejagah and Richardson at the break.

Iran international Dejagah had the hosts ahead eight minutes later with a well-taken strike before Richardson's cross was turned home by Fernando Amorebieta - the Spaniard's first Fulham goal.

But it was not plain sailing for Fulham as Nikica Jelavic pulled a goal back on 75 minutes, with the Tigers twice hitting the woodwork before Shane Long headed in a late leveller.

Given the high stakes, particularly for the hosts, the first half was bereft of quality and chances, with even simple passes going astray for both sides.

Fulham started well and Hugo Rodallega picked out the marauding John Arne Riise on four minutes, but the Norway international could only arrow a low effort well wide of Steve Harper's far post.

There was further anguish for Magath's side as Rodallega came within inches of making contact with a tempting Amorebieta cross shortly afterwards.

The pace of the game then slowed dramatically with little goalmouth action of note, with wayward crosses and misplaced passes taking centre stage.

The main talking point of the first half was Mason's decision not to award a penalty to the visitors as Amorebieta and Long came together inside the box, with the Hull striker left sprawled on the ground.

Magath reacted to a timid first-half performance by introducing both Richardson and Dejagah at half-time, with Lewis Holtby and Riise not returning after the break.

Dejagah was involved instantly as his near-post corner was met on the volley by Rodallega, with the ball whistling just over Harper's crossbar.

Despite a lively start to the half, Magath made his third and final change on 53 minutes as Steve Sidwell was replaced by Darren Bent.

But it was fellow substitute Dejagah who broke the deadlock shortly afterwards, cutting inside before bending an effort past Harper to put Fulham ahead with his sixth goal of the campaign.

The hosts' breakneck start to the second half showed no sign of abating as Amorebieta added the second just three minutes later as he glanced Richardson's cross into the far corner to double Fulham's lead.

The hosts were coasting towards another much-needed three points but Hull grabbed a goal out of nowhere to bring an air of unease to Craven Cottage as Jelavic nodded home with 15 minutes remaining.

Sascha Riether could only hook a clearance back towards his own goal and, after Stockdale had pushed the ball on to the bar, Jelavic was on hand to head into the unguarded net.

Substitute Sone Aluko then had a long-range effort deflected on to the crossbar with the looping ball completely evading Stockdale as panic started to spread around Craven Cottage.

Dejagah could have eased those nerves but his effort was closed down by Harper, with Bent bending the rebound wide.

Fulham's goal was living a charmed life and it was Ahmed Elmohamady who was next to hit the woodwork as his shot across Stockdale came back off the post.

The hosts could not hold out for the win however, and it was Aluko's deep cross that was met by the head of Long three minutes from time to earn Hull a share of the spoils and leave Fulham in 18th place with just two games remaining. 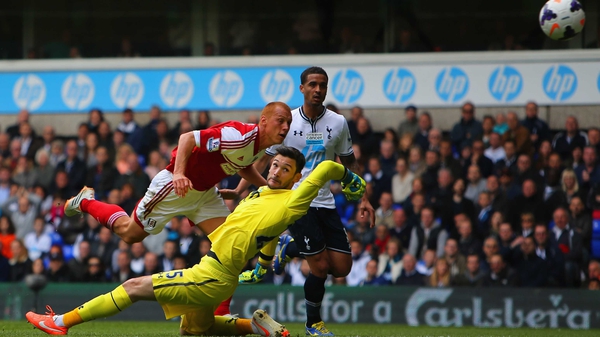