The Denmark playmaker has been one of the few shining lights in a disappointing season for Spurs, whose top-four charge looks destined to fall short in another trophyless campaign.

The underwhelming season is expected to cost Tim Sherwood his job, but Eriksen is certainly helping the head coach focus on the positives, setting up two goals in a man-of-the-match display that saw relegation-threatened Fulham beaten 3-1.

It was far from easy for the north London side, who had goalkeeper Hugo Lloris and some wayward finishing to thank for restricting the visitors to one Steve Sidwell goal.

That strike came moments after Paulinho had given Spurs a first-half lead by ghosting in unmarked to prod home an Eriksen free-kick.

Tottenham regained the lead moments into the second half when Harry Kane glanced in his third goal in as many games, before more poor defending from an Eriksen free-kick allowed Younes Kaboul to bundle home.

The Dane gave away a late penalty by handling a Hugo Rodallega flick, but Lloris saved his blushes and his late substitution was met by a standing ovation.

Fulham boss Felix Magath made five alterations in a bid to make it three successive wins, while the main Tottenham team news was Sandro's absence from the squad.

The Brazil midfielder took to Twitter at 10.20am to forewarn fans of his absence, posting "just to let you know that i'm not injured!".

Outspoken Sherwood will no doubt have something interesting to say about that tweet after a match they began slowly.

Fulham first threatened inside the opening two minutes when Alex Kacaniklic hit the side-netting, with Rodallega volleying wide soon after.

Scott Parker's dead leg after an innocuous collision with Emmanuel Adebayor gave Spurs time to settle, but they were struggling to cause the Fulham back line any serious problems.

Their first real chance came courtesy of Brede Hangeland, whose inability to clear an Eriksen corner saw Kane head back across goal and Kaboul power over from six yards.

Fernando Amorebieta blocked an Adebayor strike soon after, but not until after Lloris had come to Spurs' rescue to prevent Rodallega turning home a deflected Parker through-ball.

Soon it was opposite number David Stockdale taking the starring role, denying a goal-bound Aaron Lennon volley by palming onto the inside of the post before Hangeland, guilty for losing possession, gratefully hacked clear.

While Stockdale saved his defence that time, he could do little to stop the hosts opening the scoring after 35 minutes when Eriksen's fine free-kick was turned home by the inexplicably unmarked Paulinho.

Sherwood punched the air as much in relief as celebration, but was soon cursing poor defending of his own.

Zeki Fryers was the guilty party as he accidentally diverted Sidwell's one-two back into path of the Fulham midfielder, who showed strength, skill and composure to dink delicately over Lloris.

It was a sucker-punch that left Tottenham looking toothless heading into half-time from which they returned strongly, regaining the lead less than three minutes after the restart.

Lennon was the architect, cutting back on himself before sending in a left-footed cross that was impressively glanced home by in-form Kane.

It was the 20-year-old's third goal in as many games, but it has not been the scoring that has not been a problem for Spurs - it is keeping them out and Fulham came close soon after.

John Arne Riise's driven left-wing cross was met by a powerful header by Rodallega, whose goal-bound header was set to nestle home until Lloris' impressively tipped away.

The Colombian jokingly embraced the Spurs goalkeeper in frustration at the fine save that Fulham were made to rue further in the 62nd minute.

John Heitinga's horrible challenge on Danny Rose saw the Dutchman pick up the afternoon's first booking and gave Eriksen the chance to whip over another free-kick.

Like the opener, the Cottagers failed to deal with it and Kaboul wriggled free of Rodallega to bundle home after Stockdale failed to reach the cross.

It was another poor goal to concede by Fulham, whose frustration increased when Rose took down Kacaniklic in the box only for referee Lee Probert to dismiss their appeals.

They did, though, get a penalty in the 76th minute when Eriksen used his arm to block a Rodallega flick, only for Lloris to turn away Sidwell's powerful spot-kick.

Lloris was again in action to punch clear an Amorebieta effort late on, capping a fine display in which he ran Eriksen close for the man-of-the-match award. 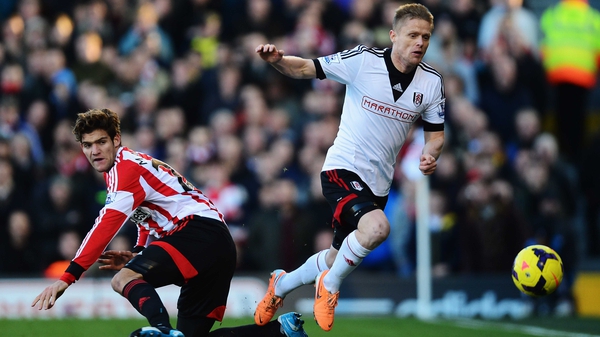