The Republic of Ireland women’s team came agonisingly close to achieving a major result against European champions and World No 2 Germany yesterday afternoon at Tallaght Stadium.

A freak injury-time goal from Melanie Leupolz gave the relieved Germans their sixth win of the 2015 FIFA World Cup qualification campaign as the Irish became the first team in 16 games to score more than once against Silvia Neid’s team.

Right from the beginning, the Germans were left in no doubt that Ireland’s recent climb up the world rankings to 30th, and their run of just two defeats in 12 games over the past 13 months, was no flash in the pan.

In the third minute, central defender Louise Quinn headed Ireland into the lead and they held that advantage until the 65th minute when the Germans equalised from a Simone Laudehr penalty.

Germany then took the lead in the 84th minute through Lena Lotzen, even though the German appeared to have fouled Ireland goalkeeper Emma Byrne, who was making a record 106th appearance for her country.

However, the Irish showed tremendous character and substitute Stephanie Roche scored from close range in the 89th minute to make it 2-2 and leave the Irish on the verge of a famous result.

But, in injury time, a cross-cum-shot from Leupolz looped over Byrne and into the Irish net for an extremely fortuitous winner.

Ireland remain in contention for a play-off spot ahead of their next game in the group, which is on 7 May against Russia at Tallaght Stadium. 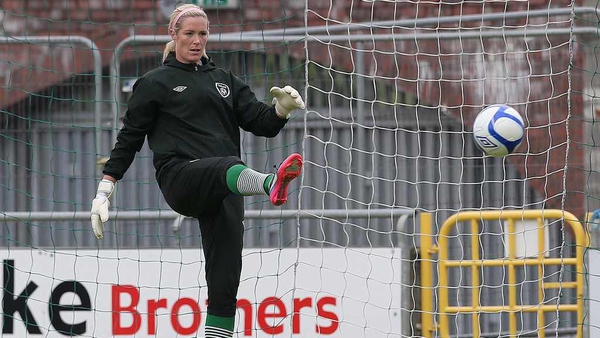