The gallant defeat means the Irish finished in sixth place in the tournament with the Canadians taking fifth – Ireland were ranked 12th of the 12 competing nations.

A massive 26 world ranking places separate the two sides - Canada ranked no. 7; Ireland no. 33 - but Sue Ronan's side showed no fear as they grabbed a 12th minute lead through Ruesha Littlejohn and held it until the 56th minute when Diana Matheson scored.

Ireland captain and goalkeeper Emma Byrne, who equalled Ciara Grant’s Irish appearance record of 105 caps, made a string of superb saves before being beaten again the final minute when Sophie Schmidt scored from close range to deny the Irish another impressive result.

It was Ireland’s first defeat in seven games, a run that stretched back 12 months to last year’s Cyprus Cup defeat by Finland, and only their second loss in 12 games.

Manager Ronan was full of praise for her side: “They were absolutely brilliant.  We got stuck into them from the start and could easily have been more than one goal ahead at half-time.

“They started with their strongest possible team and ended up having to make three changes at half-time to try and get back into the game.

“I thought we were bit a heavy legged at the beginning of the second half as four games in eight days began to take its toll but we still created an excellent scoring chance.

"We seemed to find our second wind after they equalised and we threw on some fresh legs as well and we went so close to bringing the game to penalties.

“There were only ten seconds left in normal time when they scored and they were so relieved to have got in front that they took the ball into the corner at every opportunity in injury time to run the clock down.” 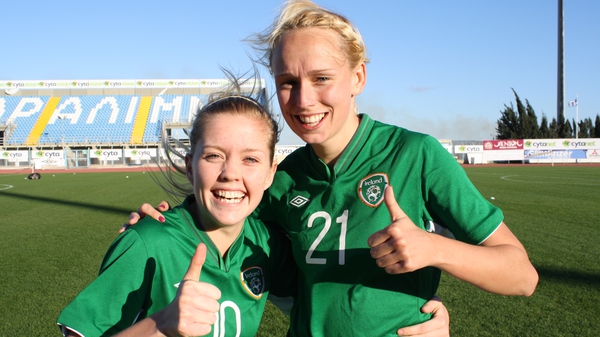