Pepe Mel insists Saido Berahino has a big role to play for West Brom in their fight against relegation after the dressing-room fracas that marred last weekend's draw against Cardiff.

Berahino was involved in an incident with team-mate James Morrison when he apparently refused to apologise for a mistake that led to Cardiff's late equaliser in the 3-3 stalemate.

West Brom have sought to play down the incident, saying it was a minor scuffle that was over in an instant and that it shows how much the players care.

It is also understood the club have no intention of selling 20-year-old Berahino, who signed a lucrative new contract in December tying him to Albion until 2017.

Mel insisted he would have no second thoughts about selecting Berahino for the final seven games of the season, the first of which is Saturday's trip to Norwich.

"I've been impressed with Saido, he's worked very well this week,” said Mel. "In addition to being an excellent player, he is also intelligent. He has shown this in training. And I'm sure he will continue to show this.

"I've spoken to him throughout the week. He is very positive. He will be important to us in the final seven games."

"It's normal they would argue among themselves. After that it's normal to have a beer and forget about it" - Pepe Mel

Mel did not want to elaborate on what happened in the dressing room at The Hawthorns, saying only: "Eighteen young sports players have come in disappointed.

"It's normal they would argue among themselves. After that it's normal to have a beer and forget about it. The players were disappointed they hadn't won the game for the supporters."

One thing Mel was disappointed about was that the incident had found its way into the press.

Although West Brom have been keen to stress the incident is in the past, they were forced to issue a statement on Wednesday night with quotes from Berahino denying he was considering legal action against Morrison.

Berahino posted a cryptic tweet on Thursday with a quote from the Bible, saying: "A patient man has great understanding, but a quick-tempered man displays folly."

Odemwingie had a high-profile and bitter falling-out with the Baggies in January 2013 after failing to push through a move to QPR.

The striker eventually left the Hawthorns last summer for Cardiff before moving on again to Stoke this January.

Odemwingie wrote on Twitter: "I see a repeat of my situation if he doesn't leave this summer. Senior pros haha."

Mel shrugged off Odemwingie's intervention, saying: "England is a free country. Everyone can say what they like.

"I don't have the pleasure of knowing him [Odemwingie]. It's not right for me to comment on him. The West Bromwich Albion training ground is the same as all dressing rooms." 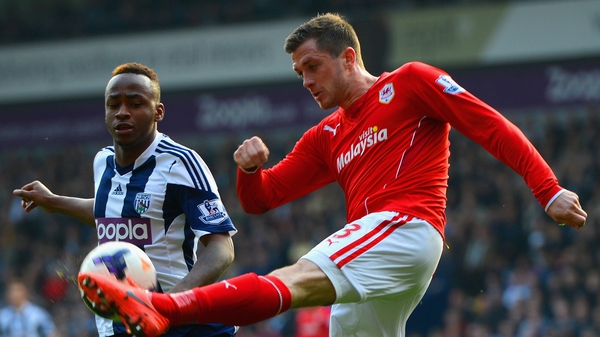