Arsene Wenger suffered a horrific 1,000th game in charge as his shambolic Arsenal side were torn apart 6-0 by a rampant Chelsea side.

There was a bizarre case of mistaken identity as Arsenal embarrassingly capitulated to Jose Mourinho’s side.

Wenger watched on helplessly after two goals in three first-half minutes from Samuel Eto'o and Andre Schurrle gave Chelsea a handsome lead inside the first seven minutes before Marriner sent off Kieran Gibbs for a handball committed by Alex Oxlade-Chamberlain.

Eden Hazard's shot was handled in the area and, despite Oxlade-Chamberlain appearing to approach the official to admit wrongdoing, Gibbs was shown a red.

Hazard converted the penalty to give the Blues a 3-0 advantage after 17 minutes. Once again the Gunners imploded at the home of a title rival following heavy losses at Manchester City and Liverpool.

Oscar added a fourth before the interval, a fifth after 66 minutes and his replacement Mohamed Salah struck his first Chelsea goal as the Blues responded from the controversial loss at Aston Villa in emphatic fashion.

Stamford Bridge revelled in the success, roaring "Arsene Wenger, we want you to stay" and "specialist in failure".

Mourinho made his "failure" barb - referring to Wenger's eight-year trophy drought - after the Frenchman suggested anyone playing down their team's title chances was doing so for fear of falling short.

It ended the truce which had broken out in Mourinho's absence from the Premier League and, ahead of their third meeting of the season, Mourinho stopped short of joining those paying tribute to Wenger ahead of his landmark match. 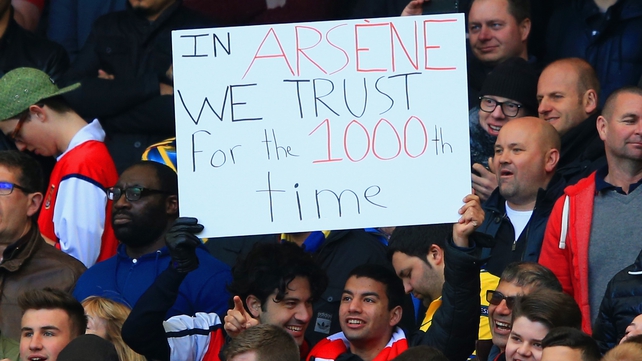 Wenger's 500th game was a loss to Chelsea in August 2006 and there were warnings in the opening skirmishes of a repeat as Schurrle and Eto'o exposed gaping holes in the Gunners defence.

Petr Cech was at full stretch to turn away an Olivier Giroud effort before a direct run from Schurrle led to the opening goal.

Schurrle fed Eto'o, who turned Oxlade-Chamberlain outside and then in before curling left-footed across Wojciech Szczesny for his 11th goal of the season, all of which have come at home.

Soon after it was two: Nemanja Matic dispossessed Tomas Rosicky and found Schurrle, whose shot through three bodies found the corner of the net.

After the 6-3 loss at the Etihad Stadium and 5-1 defeat at Anfield, both early Saturday kick-offs, the sinking feeling was familiar for the Gunners.

Worse was to follow when Hazard's shot beat Szczesny and Oxlade-Chamberlain dived to his left to handle the shot, which was going wide.

After Marriner’s mix-up resulted in Gibbs being sent off, Hazard scored and Thomas Vermaelen went on for Lukas Podolski, but the Gunners leaked a fourth three minutes before half-time when Fernando Torres, on for the injured Eto'o, crossed for Oscar to tap in.

Oxlade-Chamberlain and Laurent Koscielny did not reappear for the second half as Wenger made two further substitutions in an effort to stop the rot.

Torres had a mazy run halted by Per Mertesacker and the ball broke for David Luiz, whose shot was saved by Szczesny, while there was a rare Arsenal attack which saw Santi Cazorla flash a shot across goal after 60 minutes.

Arsenal's miserable afternoon continued when the defence backed off and allowed Oscar to shoot from the edge of the area, with Szczesny less than convincing in being beaten for a fifth time.

Salah replaced Oscar and soon after netted under Szczesny after racing on to Matic's lofted pass, completing the rout.

The only saving grace on this occasion was that the decision did not appear to impact on the result and it is likely that Oxlade-Chamberlain will serve the suspension if Arsenal appeal or the FA intervene.

With eight games remaining, Chelsea top the standings having played more matches than their three rivals, but Wenger's title chance seems to have slipped and regaining the FA Cup last won in 2005 appears to be the Gunners' only opportunity of ending their silverware search. 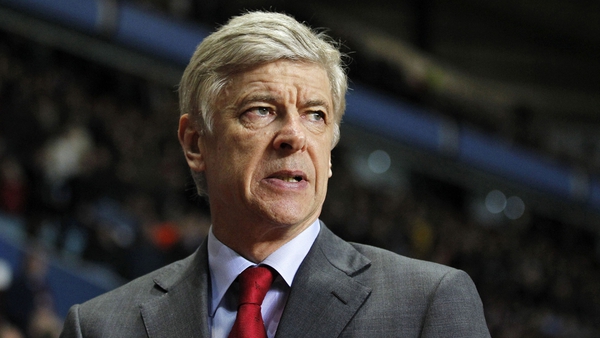