Well-taken goals from Paddy Kavanagh and Dinny Corcoran helped get Bohemians’ SSE Airtricity League Premier Division season off to the ideal start with a 3-0 win at the UCD Bowl.

Jason Byrne rowed in with a late third off the bench to continue his record goals quest.

UCD began quite brightly, forcing two early corners, but they were soon on the back foot and could have been three down within 20 minutes as Bohemians took full control.

The lively Kavanagh flashed a 25-yard drive wide on 11 minutes before he crossed from the right for Karl Moore, whose volley on the turn came back off a post five minutes later.

Craig Walsh then burst through on goal as home 'keeper Conor O’Donnell had to be brave to save at the midfielder’s feet.

The College goal continued to live a charmed life as Corcoran looped a header onto the crossbar from Moore’s cross on 21 minutes.

UCD relieved the pressure with Chris Mulhall having a goal-bound shot blocked by Jack Memery before service resumed at the other end as Bohs deservedly took the lead on 35 minutes.

Not surprisingly it came from the inspired Kavanagh. The best player on the pitch in the first half collected Moore’s pass to cut in from the left before curling a delightful right-footer to the top corner of the net from outside the area.

O’Donnell then prevented a second Bohs goal minutes before the break with a superb save to turn Walsh’s stinging, angled drive round a post.

UCD had a bit more about them from the start of the second half and skipper Robbie Benson miscued in front of goal from Gareth Matthews’ cross when he should have done better.

But terrific feet from Corcoran, who turned adroitly in the area, before shooting home off the far post on 63 minutes, effectively sealed Bohemians' deserved victory.

UCD heads never dropped, though, and they pressed to get back into the game.

Dean Clarke warmed the hands of Dean Delaney with a fierce drive after a surging run on 67 minutes. Eight minutes later Benson's glancing header from a Gareth Matthews cross again worked Delaney in the visitors' goal.

But substitute Byrne added the gloss for Bohemians with a diving header on 87 minutes after O’Donnell had brilliantly batted away a drive from Steven Beattie. 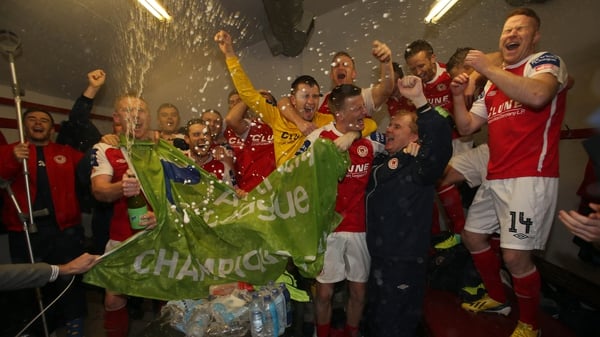 Analysis: Saints will remain team to beat in 2014